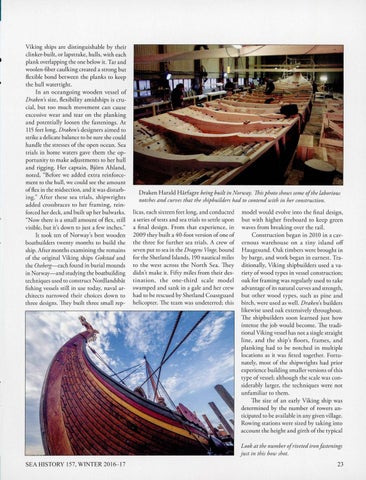 Viking ships are distinguishable by their clinker-built, or lapstrake, hulls, with each plank overlapping the one below it. Tar and woolen-fiber caulking created a strong bur Bexible bond between the planks to keep the hull watertight. In an oceangoing wooden vessel of D raken&#39;s size, Bexibility amidships is crucial, but too much movement can cause excessive wea r and tear on the planking and potentially loosen the fastenings. Ar 115 feet long, D raken &#39;s designers aimed to strike a delicate balance to be sure she could h andle the stresses of the open ocean. Sea trials in home waters gave rhem the opportunity to make adjustments to her hull and rigging. H er captain, Bjorn Ahland, noted, &quot;Before we added extra reinforcement to rhe hull, we could see rhe amount of Rex in rhe midsection, and it was disturbing.&quot; After these sea trials, shipw rights added crossbraces to her framing, rei nfo rced her deck, and built up her bulwa rks. &quot;Now there is a small amount of Rex, still visible, but it&#39;s down to just a few inches .&quot; Ir took ten of N orway&#39;s best wooden boatbuilders twenty months to build the ship. After months examining the remains of rhe original Viking ships Gokstad and the Oseberg-each fo und in burial mounds in No rway- and studying the boarbuilding techniques used to construct Nordlandsbar fis hing vessels still in use today, naval architects narrowed their choices down to three designs. They built three sm all rep-

Draken H arald H arfa gre being built in Norway. This photo shows some of the laborious notches and curves that the shipbuilders had to contend with in her construction. licas, each sixteen feet long, and conducted a series of tests and sea trials to settle upon a fin al design. From that experience, in 2009 they built a 40-foo t version of one of the three for further sea trials. A crew of seven put to sea in the D ragens vtnge, bound for rhe Shetland Islands, 190 nautical miles to the west across the North Sea. They didn&#39;t make it. Fifty miles from their desti n ation , rhe on e-third sca le m od el swamped and sank in a gale and her crew had to be rescued by Shetland Coastguard helicopter. The ream was undeterred; this

model wo uld evolve into the fi nal design, but with higher freeboard to keep green waves from breaking over the rail. Construction began in 2010 in a cavernous wa reh ouse on a tiny island off H auges und. O ak timbers were brought in by barge, and work began in earnest. Traditionally, Viking shipbuilders used a variety of wood types in vessel construction; oak for framing was regularly used to take advantage ofirs natural curves and strength, bur other wood types , such as pine and birch, were used as well. D raken&#39;s builders likewise used oak extensively th roughout. The sh ipbuilders soon learned just h ow intense the job wo uld become. The traditional Viking vessel has nor a single straight lin e, and the ship&#39;s Boors, fram es, and planking h ad to be notch ed in multiple locations as it was fitted toge ther. Fortunately, most of the shipwrights had prior experience building smaller versions of this type of vessel; although rhe scale was considerably larger, rhe techniques were nor unfa miliar to them . The size of an early Viking sh ip was determined by the number of rowers anticipated to be available in any given village. Rowing stations were sized by taking into account the height and girth of the typical L ook at the number ofriveted iron fastenings just in this bow shot.