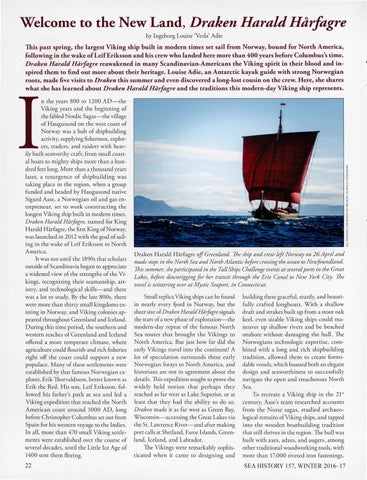 This past spring, the largest Viking ship built in modern times set sail from Norway, bound for North America, following in the wake of Leif Eriksson and his crew who landed here more than 400 years before Columbus&#39;s time. Draken Harald Harfagre reawakened in many Scandinavian-Americans the Viking spirit in their blood and inspired them to find out more about their heritage. Louise Adie, an Antarctic kayak guide with strong Norwegian roots, made five visits to Draken this summer and even discovered a long-lost cousin on the crew. Here, she shares what she has learned about Draken Harald Harfagre and the traditions this modern-day Viking ship represents. n the years 800 to 1200 AD-the Viking years and the beginning of the fabled Nordic Sagas-the village of H augusund on the wes t coast of No rway was a hub of shipbuilding activity, supplying fishermen, explorers, traders, and raiders with heavily built seaworthy craft, from small coas tal boats to mighty ships more than a hundred feet long. More than a thousand years later, a resurgence of shipbuilding was taking place in the region, when a group funded and headed by H augusund native Sigurd Aase, a Norwegian oil and gas entrepreneur, set to wo rk co nstructing the longest Viking ship built in modern times. Draken Harald Harfagre, named for King H arald H arfagre, the fi rs t King ofNorway, was launched in 201 2 with the goal of sailing in the wake of Leif Eriksson to No rth America. It was not until the 189 0s that schol ars outside of Scandinavia began to appreciate a widened view of the strengths of the Vikings, recognizing their seamanship, artistry, and technological skills-and there was a lot to study. By the late 800s, there were more than thirty small kingdoms existing in N orway, and Vik ing colonies appeared thro ughout Greenland and Iceland. During this ti me period, the southern and western reaches of Greenland and Iceland offered a more temperate climate, where agriculture could flourish and rich fisheries right off the coast could support a new populace. Many of these se ttlements were established by that fa mous Norwegian explorer, Erik Thorvaldsson, better known as Erik the Red. His son, Leif Eriksson, fo llowed his fat her&#39;s path at sea and led a Viking expedition that reached the North A merican coast aro und 1000 A D , long before Christopher Columbus set out from Spain for his western voyage to the Indies. In all, more than 470 small Viking settlements were established over rhe course of several decades, until the Little Ice Age of 1400 sent them fleeing.

Draken H arald H arfag re off Greenland. 1he ship and crew left Norway on 26 April and

made stops in the North Sea and North Atlantic before crossing the ocean to Newfoundland. 1his summer, she participated in the Tall Ships Challenge events at several ports in the Great Lakes, before down rigging for her transit through the Erie Canal to New York City. 1he vessel is wintering over at Mystic Seaport, in Connecticut. Small replica Viking ships can be fou nd in nearly every fjo rd in No rway, bur the sheer size of Draken Harald Harfagre signals the start of a new phase of exploration- the modern-day repeat of the fa mous North Sea ro utes rhar bro ught rhe Vikings to N orth America. Bur just how fa r did the early Vikings travel into the continent? A lot of speculation surrounds these early Norwegian forays to N orth America, and histori ans are nor in agreement about the derails. This expedition sought to prove rhe widely held not ion rh ar perhaps they reached as far wes t as Lake Superior, or at least that they had rhe ability to do so. Draken made it as fa r west as G reen Bay, W isconsin-accessing the Grear Lakes via the Sr. Lawrence River-and after making port calls at Shetland, Faroe Islands, Greenland, Iceland, and Labrador. The Vikings were remarkably sophisticated when it cam e to designing and

building these graceful, sturdy, and beautifully crafted longboats. With a shallow draft and strakes built up from a stout oak keel, even sizable Viking ships could m aneuver up shallow rivers and be beached onshore without damaging the hull. The Norwegians rechnologic expertise, combined w ith a long and rich shipbuilding tradi tion, allowed them to create fo rmidable vessels, which boasted both an elegant design and seaworthiness to successfully navigate the open and treacherous North Sea. To recreate a Vik ing ship in the 21&quot; century, Aase&#39;s team researched accounts from the No rse sagas, studied arch aeological remains ofViking ships, and tapped into the wooden boarbuilding rradirion that still thrives in the region. The hull was bui lt with axes, adzes, and augers, among other traditional woodworking tools, with more than 17,000 riveted iron fas tenings.