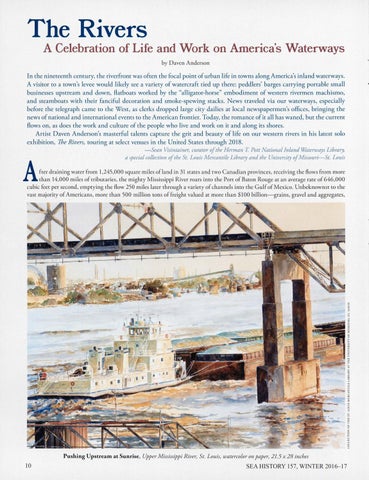 The Rivers A Celebration of Life and Work on America&#39;s Waterways by Daven Anderson

In the nineteenth century, the riverfront was often the focal point of urban life in towns along America&#39;s inland waterways. A visitor to a town&#39;s levee would likely see a variety of watercraft tied up there: peddlers&#39; barges carrying portable small businesses upstream and down, flatboats worked by the &quot;alligator-horse&quot; embodiment of western rivermen machismo, and steamboats with their fanciful decoration and smoke-spewing stacks. News traveled via our waterways, especially before the telegraph came to the West, as clerks dropped large city dailies at local newspapermen&#39;s offices, bringing the news of national and international events to the American frontier. Today, the romance of it all has waned, bur the current flows on, as does the work and culture of the people who live and work on it and along its shores. Artist Daven Anderson&#39;s masterful talents capture the grit and beauty of life on our western rivers in his latest solo exhibition, 1he Rivers, touring at select venues in the United States through 20 18. - Sean Visintainer, curator ofthe Herman T. Pott National Inland Waterways Library, a special collection ofthe St. Louis Mercantile Library and the University ofMissouri-St. Louis

fter draining water from 1,245,000 square miles ofland in 31 states and two Canadian provinces, receiving rhe flows from more rhan 14,000 miles of tributaries, rhe mighty Mississippi River roars into the Port of Baron Rouge ar an average rare of 646,000 cubic feet per second, emptying rhe flow 250 miles later through a variety of channels into the Gulf of Mexico. Unbeknownst ro the vast majority of Americans, more than 500 million rons of freight valued at more than $100 billion-grains, gravel and aggregates, ~