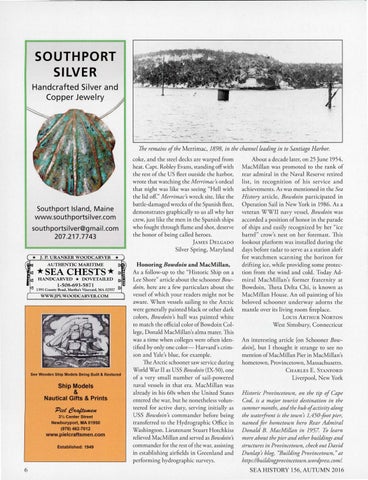 The remains of the Merrimac, 1898, in the channel leading in to Santiago H arbor.

coke, and the steel decks are warped from heat. Capt. Robley Evans, standing off with the rest of the US fleet outside the harbor, wrote that watching the Merrimac&#39;s ordeal that night was like was seeing &quot;Hell with the lid off.&quot; Merrimac&#39;s wreck site, like the battle-damaged wrecks of the Spanish fleet, demonstrates graphically to us all why her crew, just like the men in the Spanish ships who fo ught through flame and shot, deserve the honor of being called heroes . ] AMES D ELGAD O

Silver Spring, Maryland H onoring Bowdoin and MacMillan , As a follow- up to the &quot;Historic Ship on a Lee Shore&quot; article about the schooner Bowdoin, here are a few particulars about the vessel of which your readers might not be aware. When vessels sailing to the Arctic were generally painted black or other dark colors, Bowdoin&#39;s hull was painted white to match the official color of Bowdoin College, Don ald M acMillan&#39;s alma mater. This was a time when colleges were ofren identified by only one color- H arvard&#39;s crimson and Yale&#39;s blue, for example. The Arctic schooner saw service during World War II as USS Bowdoin (IX-5 0), one of a very small number of sail-powered naval vessels in that era. MacMillan was already in his 60s when the United States entered the war, but he nonetheless volunteered for active duty, serving initially as USS Bowdoin&#39;s commander before being transferred to the Hyd rographic O ffi ce in Washington . Lieutenant Stuart Hotchkiss relieved MacMillan and served as Bowdoin&#39;s co mmander fo r the rest of the war, assisting in establishing airfields in Greenland and performing hydrographic surveys.

About a decade later, on 25 June 1954, MacMillan was promoted to the rank of rea r admiral in the Naval Reserve retired list, in recognition of his service and achievements. As was mentioned in the Sea H istory article, Bowdoin participated in Operation Sail in New York in 1986. As a veteran WWII navy vessel, Bowdoin was accorded a pos ition of honor in the parade of ships and easily recognized by her &quot;ice barrel &quot; crow&#39;s nest on her fo remas t. This lookout platfo rm was installed during the days before radar to serve as a station alofr fo r watchmen scan ning the horizon for drifting ice, while providing some protection from the wind and cold. Today Admiral M acMillan&#39;s fo rmer fraternity at Bowdoin, Theta D elta C hi, is known as M acM illan H ouse. An oil painting of his beloved schooner underway adorns the mantle over its living room fi replace. Lours A RT H UR NoRTON

Wes t Simsbury, Connecticut An interesting article [o n Schooner Bowdoin], but I thought it stran ge to see no mention of MacMillan Pier in MacMi llan&#39;s hometown, Provincetown, Massachusetts. CHARLES E. STANFORD Liverpool, New York H istoric Provincetown, on the tip of Cape Cod, is a major tourist destination in the summer months, and the hub ofactivity along the waterfront is the town&#39;s J,450 joot pier, named for hometown hero Rear Admiral Donald B. MacM illan in 1957 To learn more about the p ier and other buildings and structures in Provincetown, check out D avid D unlap&#39;s blog, &quot;Building Provincetown,&quot; at https:llbuildingprovincetown.wordpress.com!