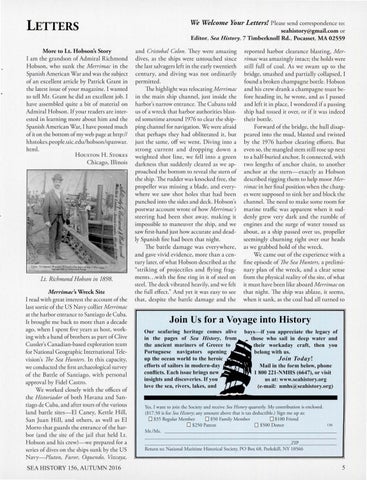 We Welcome Your Letters! P lease send correspondence to:

More to Lt. Robson&#39;s Story I am the grandson of Admi ral Richmond Hobson, w ho sunk the Merrimac in the Spanish American War and was the subject of an excellent article by Patrick Grant in the latest issue of yo ur magazine. I wanted to tell Mr. G ra nt he did an excellent job. I have assembled quite a bit of material on Admiral Hobson. If your readers are interested in lea rning more about him and the Spanish American War, I have posted much ofir on the bottom of my web page at http: // hhstokes. people. uic.edu/hobson/spanwar. html. HOUSTON H . STOKES

Lt. Richmond Hobson in 1898. Merrimac&#39;s Wreck Site I read with great interest the acco unt of the last sortie of the US Navy collier Merrimac at the harbor entrance to Santiago de C uba. Ir brought me back to more than a decade ago, when I spent five years as host, working with a band of brothers as part of Clive Cussler&#39;s Canadian-based exploration team for National Geographic International Television&#39;s The Sea Hunters. In this capacity, we conducted the first archaeological survey of the Barde of Santiago, with personal approval by Fidel Castro. We worked closely with the offices of the Historiador of both Havana and Santiago de C uba, and after tours of the va rious land battle sites-El Caney, Kerrie Hill, San Juan Hill, and others, as well as E l Morro rhar guards the entrance of the harbor (a nd the sire of the jail that held Lr. Hobson and his crew)-we prepared for a series of dives on the ships sunk by the US Navy-Pluton, Furor, Oquendo, Vizcaya, SEA HISTORY 156,AUTUMN 20 16

and Cristobal Colon. They were amazi ng dives, as the ships were untouched since the last salvagers left in the early twentieth century, and diving was not ordinarily permitted. The highlight was relocating Merrimac in the main ship channel, just inside the harbor&#39;s narrow entrance. The C ubans told us of a wreck that harbor authorities blasted sometime around 1976 to clear the shipping channel for navigation. We were afraid that perhaps they had obliterated it, bur just the same, off we went. Diving into a stron g cu rrent and dropping down a weighted sh ot line, we fell into a green dark ness that suddenly clea red as we approached the bottom to reveal the stern of the ship. The rudder was knocked free, the propeller was missing a blade, and everywhere we saw shot holes that h ad been punched into the sides and deck. Hobson&#39;s postwar acco unt wrote of how Merrimac&#39;s steering had been shot away, making it impossible to m aneuver the ship, and we saw first-ha nd just how accurate and deadly Spanish fire had been that night. The battle damage was everywhere, and gave vivid evidence, more than a cenrury later, of what Hobson described as the &quot;striking of projectiles and fl ying fragments ...with the fine ring in it of steel on steel. The deck vibrated heavi ly, and we felt the full effect.&quot; And ye t it was easy to see that, despite the battle damage and the

reported h arbor clearance blasting, Merrimac was amazingly intact; the holds were still fu ll of coal. As we swam up to the bridge, sm ashed and partially collapsed, I fo und a broken champagne bottle. Hobson and his crew drank a champagne toas t before heading in, he wrote, a nd as I passed a nd left it in place, I wondered if a passing ship h ad tossed it over, or if it was indeed rhei r bottle. Forward of the bridge, the hull disappeared into the mud , blasted and twisted by the 1976 harbor clearing efforts. Bur even so, the mangled stem sti ll rose up next to a half- buried anchor. It connected, with two lengths of anchor chain, to another anchor at rhe stern-exactly as Hobson described rigging them to help moor Merrimac in her final position when the charges were supposed to sink her a nd block the channel. The need to make some room for marine traffic was apparent when it suddenly grew very dark and the rumble of engines and the surge of water tossed us about, as a sh ip passed over us, propeller seemingly churning right over our heads as we grabbed hold of the wreck. We came out of the experience w ith a fine episode of The Sea Hunters, a prelim inary plan of the wreck, and a clea r sense from the physical reality of the site, of what it must have been li ke aboard Merrimac on that night. The ship was ablaze, it seems, when it sank, as the coal had all turned to

Join Us for a Voyage into History Our seafaring heritage comes alive in the pages of Sea History, from the ancient mariners of Greece to Portuguese navigators opening up the ocean world to the heroic efforts of sa ilors in modern-day conflicts. Each issue brings new insights and discoveries. If you love the sea, rivers, lakes, and

bays-if yo u appreciate the legacy of those who sail in deep water and their workaday craft, then yo u belong with us.