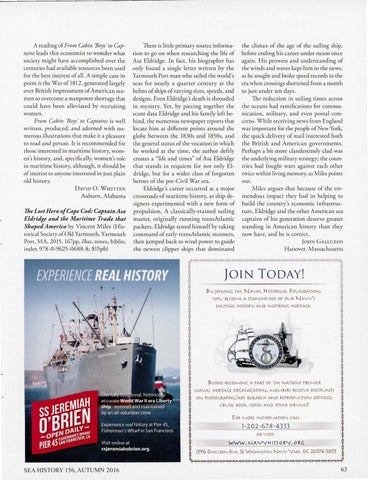 A reading of From Cabin &#39;Boys&#39; to Captains leads this economist to wonder what society might have accomplished over the centuries had available resources been used fo r the best interest of all. A simple case in point is the War of 1812, generated largely over British impressment of American seamen to overcome a manpower shortage chat could have been alleviated by recruiting women . From Cabin &#39;Boys&#39; to Captains is well written, produced, and adorned with numerous illustrations that make it a pleasure to read and peruse. It is recommended fo r those interested in maritime history, women&#39;s history, and, specifically, wom en&#39;s role in maritime history, although, it should be of interest to anyone interested in just plain old history. D AVID 0 . WHITTEN Auburn, A labama

There is little primary source information to go on when researching the life of Asa Eldridge. In fac t, his biographer has only found a single letter written by the Yarmouth Port man who sailed the world &#39;s seas fo r nea rly a quarter centu ry at the helms of ships of varying sizes, speeds, and designs. Even Eldridge&#39;s death is sh ro uded in mys tery. Yet, by piecing roge ther the scant data Eldridge and his fa mily left behind, the numerous newspape r reports that locate him at di ffe rent points around the globe between the 1830s and 185 0s, and the general status of the vocation in which he worked at the time, the author deftly creates a &quot;life and ti mes&quot; of Asa Eldridge that stand s in requiem fo r not only Eldridge, but fo r a wider class of fo rgotten heroes of the pre-Civil War era. Eldridge&#39;s career occurred at a major cross roads of maritime hisrory, as ship designers experimented with a new fo rm of propulsion . A classically- trained sailing mas ter, originally running transAtlantic packers, Eldridge tes ted himself by taking command of early transAtlantic steamers, then jumped back to wind power ro guide the newes t clipper ships that dominated

the climax of the age of the sailing ship, before ending his career under steam once again. His prowess and understanding of the winds and waves kept him in the news, as he sought and broke speed records in the era when crossings shortened fro m a month to just under ten days. The reduction in sailing times across the oceans had ramifi cations for com munication, military, and even postal concerns. W hile receiving news from England was important fo r the people of New York, the quick delivery of mail interested both the British and American governments. Perhaps a bit more clandestinely clad was the underlying military strategy; the countries had fo ught wars against each other twice within living memory, as M iles points OU(.

M iles argues that because of the tremendous impact they had in helping to build the country&#39;s economic in fras tructure, Eldridge and the other American sea captains of his generation deserve greater standing in American history than they now have, and he is correcr. ] O H N GALLUZZO