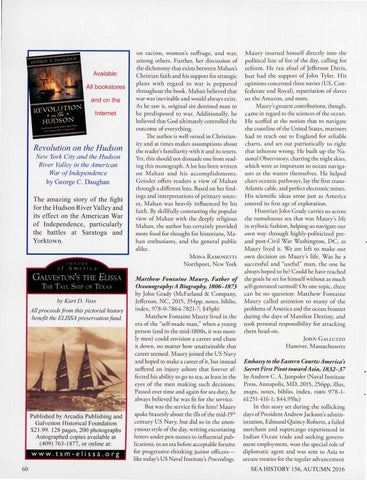 and on the Internet

on racism, women's su ffrage, and war, among others. Further, her discussion of the dichotomy that exists between Mahan's C hristian faith and his support for strategic pla ns w ith regard to war is peppered throughout the book. Mahan believed that war was inevitable and wo uld always exist. As he saw it, original sin destined man ro be predisposed to wa r. Additionally, he believed that God ultimately controlled the outcome of everything. The author is well versed in C hri stianity and at times makes ass umptions about the reader's familiarity with it and its tenets. Yet, this should not dissuade one from reading this monograph. A lot has been written on Mahan and his accomplishments. Geissler offers readers a view of Mahan through a different lens. Based on her findings and interpretations of primary sources, Mahan was heavily influenced by his fai th . By skillfully contras ting the popular view of Mahan with the deeply religious Mahan, the author has certainly provided more food for thought for historians, Mahan emhusias rs, and the general public alike. MONA R AMONETTI

by Kurt D . Voss All proceeds from this pictorial histo1y benefit the ELISSA preservation fund.

Matthew Fontaine Maury, Father of Oceanography : A Biography, 1806-1873 by John Grady (McFarland & Company, Jefferson, NC , 2015, 354pp, notes, biblio, index, 978- 0-7864-7821-7; $45pb) Matthew Fontaine Maury lived in the era of the "self-made man," when a young person (and in the mid-1800s, it was mostly men) could envision a career and chase it down, no matter how unattai nable that career seemed. Maury joined the US Navy and hoped to make a career of it, but instead suffered an injury ashore that foreve r affected his ability to go ro sea, at least in the eyes of the men making such decisions. Passed over time and again for sea duty, he always believed he was fit for the service. But was the service fit for him? Maury spoke brazenly about the ills of the mid-19'h century US Navy, but did so in the anonymous style of the day, writing excoriating letters under pen names to influential publications, in an era before acceptable forums for progressive-chinking junior officerslike today's US Naval Institute's Proceedings.

Maury inserted himself directly into the political li ne of fire of the day, calling for reform . He ran afoul of Jefferson Davis, bur had the support of John Tyler. His opinions concerned three navies (US, Confederate and Royal), repatriation of slaves ro the Amazon, and more. Maury's greatest contributions, though, came in regard to the sciences of the ocean. H e scoffed at the notion that to navigate rhe coastline of the United States, m ariners h ad to reach out ro England for reliable ch arts, and set out patriotically to right th at inherent wrong. H e built up the National Observatory, charring the night skies, which were as important to ocean navigarors as the waters themselves. H e helped chart oceanic pathways, lay the first rransAtlantic cable, and perfect electronic mines. His scientific ideas arose just as America entered its first age of exploration . Historian John Grady carries us across the tumultuous sea that was Maury's life in stylistic fas hion, helping us navigate our own way through highly-politicized preand post-Civil War Washington, DC , as Maury lived it. We are left to m ake our own decision on Maury's life. Was he a successful and "useful " m an, the one he always hoped to be? Could he have reached the goals he set for himself wi thout as much self-generated turmoil? On one topic, there can be no question: Matthew Fontaine Maury called attention to m any of the problems of America and the ocean frontier during the days of Manifest Destiny, and rook personal responsibility for attacking them head-on. J OHN GALLUZZO