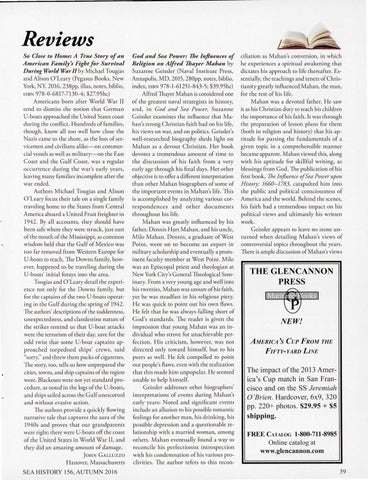 Reviews So Close to Home: A True Story of an American Family&#39;s Fight for Survival During World War II by Michael Tougias and Alison O&#39;Leary (Pegasus Books, New York, NY, 2016, 238pp, illus, notes, biblio, ISBN 978-0-6817-7130-4; $27.95hc) Americans born after World War II tend to dismiss the notion that German U-boats approached the United States coast during the conflict. Hundreds of families, though, know all too well how close the Nazis came to the shore, as the loss of servicemen and civilians alike-on commercial vessels as well as military-on the East Coast and the Gulf Coast, was a regular occurrence during the war&#39;s early years, leaving many families incomplete after the war ended. Authors Michael Tougias and Alison O&#39;Leary focus their tale on a single family traveling home to the States from Central America aboard a United Fruit freighter in 1942. By all accounts, they should have been safe where they were struck, just east of the mouth of the Mississippi, as common wisdom held that the G ulf of Mexico was too far removed from Western Europe for U-boats to reach. The Downs family, however, happened to be traveling during the U-boats&#39; initial forays into the area. Tougias and O&#39;Leary detail the experience not only for the Downs family, but for the captains of the two U-boats operating in the Gulf during the spring of 1942. The authors&#39; descriptions of the suddenness, unexpectedness, and clandestine nature of the strikes remind us that U-boat attacks were the terrorism of their day, save for the odd twist that some U-boat captains approached torpedoed ships&#39; crews, said &quot;sorry,&quot; and threw them packs of cigarettes. The story, too, tells us how unprepared the cities, towns, and ship captains of the region were. Blackouts were not yet standard procedure, as noted in the logs of the U-boats, and ships sailed across the Gulf unescorted and without evasive action. The authors provide a quickly flowing narrative tale that captures the aura of the 1940s and proves that our grandparents were right; there were U-boats off the coast of the United States in World War II, and they did an amazing amo unt of damage. J OHN GALLUZZO

God and Sea Power: 1he Influences of ciliation as Mahan&#39;s conversion, in which Religion on Alfred 1hayer Mahan by he experiences a spiritual awakening that Suzanne Geissler (Naval Institute Press, Annapolis, MD, 2015, 280pp, notes, biblio, index, ISBN 978 -1-61 251-843-5; $39.95hc) Alfred Thayer Mahan is considered one of the greatest naval strategists in history, and, in God and Sea Power, Suzanne Geissler examines the influence that Mahan&#39;s strong Christian faith had on his life, his views on war, and on politics. Geissler&#39;s well-researched biography sheds light on Mahan as a devout C hristian. Her book devotes a tremendous amount of time to the discussion of his faith from a very early age through his final days. Her other objective is to offer a different interpretation than other Mahan biographers of some of the important events in Mahan&#39;s life. This is accomplished by analyzing various correspondences and other documents throughout his life. Mahan was greatly influenced by his father, Dennis Hart Mahan, and his uncle, Milo Mahan. Dennis, a graduate of West Point, went on to become an expert in military scholarship and eventually a prominent faculty member at West Point. Milo was an Episcopal priest and theologian at New York City&#39;s General Theological Seminary. From a very yo ung age and well into his twenties, Mahan was unsure of his faith, yet he was steadfast in his religious piety. He was quick to point out his own flaws . He felt that he was always falling short of God&#39;s standards. The reader is given the impression that yo ung Mahan was an individual who strove for unachievable perfection. His criticism, however, was not directed only toward himself, but to his peers as well. He felt compelled to point out people&#39;s flaws , even with the realization that this made him unpopular. He seemed unable to help himself. Geissler addresses other biographers&#39; interpretations of events during Mahan&#39;s early years: No ted and significant events include an allusion to his possible romantic feelings for another man, his drinking, his possible depression and a questionable relationship with a married woman, among others. Mahan eventually fo und a way to reconcile his perfectionist introspection with his condemnation of his vario us proclivities. The author refers to this recon-

dictates his approach to life thereafter. Essentially, the teachings and tenets of Christianity greatly influenced Mahan, the man, for the rest of his life. Mahan was a devoted father. He saw it as his Christian duty to teach his children the importance of his faith. It was through the preparation of lesson plans for them (both in religion and history) that his aptitude for parsing the fundamentals of a given topic in a comprehensible manner became apparent. Mahan viewed this, along with his aptitude for skillful writing, as blessings from God. The publication of his first book, The Influence ofSea Power upon History: 1660-1183, catapulted him into the public and political consciousness of America and the world. Behind the scenes, his faith had a tremendous impact on his political views and ultimately his written work. Geissler appears to leave no stone unturned when detailing Mahan&#39;s views of controversial topics throughout the years. There is ample discussion ofMahan&#39;s views