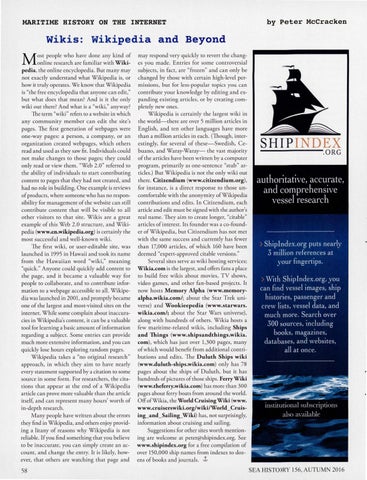 MARITIME HISTORY ON THE INTERNET

Wikis: Wikipedia and Beyond ost people who have done any kind of online research are familiar with W ikipedia, the online encyclopedia. But many may not exactly understand what Wikipedia is, or how it tru ly operates. We know that Wikipedia is &quot;the free encyclopedia that anyone can edit,&quot; but what does that mean? And is it the only wiki out there? And what is a &quot;wiki,&quot; anyway? The rerm &quot;wiki&quot; refers to a website in which any community member can edit the site&#39;s pages. The first generation of webpages were one-way pages: a person, a company, or an organ ization created webpages, which others read and used as they saw fir. Individuals could not make changes to those pages; they could only read or view them. &quot;Web 2 .0&quot; referred to the ability of individ uals to start contributing content to pages that they had not created, and had no role in building. One example is reviews of products, where someone who has no responsibility fo r ma nagement of the website can still contribute content that will be visible to all other visitors to that site. Wikis are a great example of this Web 2.0 structure, and Wikipedia (www.en.wikipedia.org) is certainly the most successful and well-known wiki. The first wik i, or user-editable site, was launched in 1995 in Hawa ii and rook its name from the Hawaiian word &quot;wiki,&quot; mea ning &quot;quick.&quot; Anyone could qu ickly add content ro the page, and it became a valuable way for people to collaborate, and to contribute information ro a webpage accessible to all. Wikipedia was launched in 2001, and promptly became one of the largest and most-visited sites on the internet. W h ile some complain about inaccuracies in Wikipedia&#39;s content, it can be a valuable too l for learning a basic amount of information regarding a subject. Some entries can provide much more extensive informat ion, and you can quickly lose hours exploring random pages. Wikiped ia takes a &quot;no original research &quot; approach, in which they aim ro have nearly every statement supported by a citation to some source in some form. For researchers, the citations that appear at the end of a Wikipedia article can prove more valuable than the article itself, and can represent many hours&#39; worth of in-depth research. Many people have written about the errors they find in Wikipedia, and others enjoy providing a litany of reasons why Wikipedia is not reli able. If you find something that you believe to be inaccurate, you can simply create an account, and change the entry. It is likely, however, that others are watch ing that page and

may respond very quickly to revert the changes you made. Entries for some controversial subjects, in fact, are &quot;frozen&quot; and can on ly be changed by those with certa in h igh-level permissions, but for less-popular topics you can contribute your knowledge by editing and expandi ng existing articles , or by creating completely new ones. Wikipedia is certainly the largest wiki in the world-there are over 5 million articles in English, and ten other lang uages have more than a million articles in each. (Though, interestingly, for several of these-Swedish, Cebuano, and Waray-Waray- the vast majority of the articles have been written by a computer program, primarily as one-sentence &quot;stub&quot; articles.) But Wikipedia is not the only wiki out there. Citizendium (www.citizendium.org), for instance, is a direct response to those uncomfortable with the anonymity ofWikipedia contributions and edits. In Citizendium, each article and edit must be signed with the author&#39;s real name. They aim to create longer, &quot;citable&quot; articles of interest. Its founder was a co-founder ofWikipedia, but Citizendium has not met with the same success and currently has fewer than 17,000 articles, of which 160 have been deemed &quot;expert-approved citable versions.&quot; Several sites serve as wiki hosting services; W ilda.com is the largest, and offers fans a place to build free wikis about movies, TV shows, video games, and other fan- based projects. It now hosts Memory Alpha (www.memoryalpha.wikia.com/; about rhe Srar Trek universe) and Wookieepedia (www.starwars. w ikia.com/; about rhe Star Wars universe), along with hundreds of others. Wikia hosts a few maririme-relared wikis, including Ships and Things (w ww.shipsandthings.wikia. com), which has just over 1,300 pages, many of which would benefit from additional contributions and edits. The Duluth Ships wiki (www.duluth-ships.wikia.com) only has 78 pages about rhe ships of D ul uth, but it has hu ndreds of pictures of rhose ships. Ferry Wiki (www.theferry.wikia.com) has more than 300 pages about ferry boars from around rhe world. Off ofWikia, rhe World Cruising W iki (www. www.cruiserswiki.org/wiki/World_ Cruising_and_Sailing_Wiki) has, nor surprisingly, information about cruising and sailing. Suggestions for other sires worth mentioning are welcome at perer@sh ipindex.org. See www.shipindex.org for a free compilation of over 150,000 ship names from indexes to dozens of books and journals. 1-