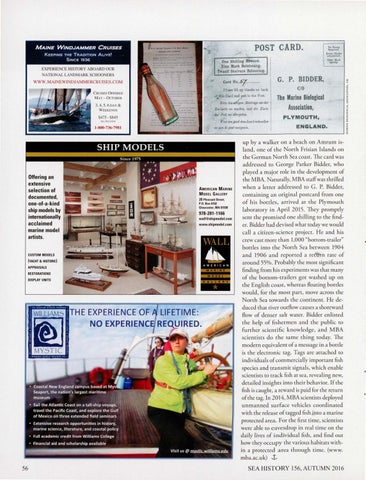 up by a walker on a beach on Amrum island, one of the North Frisian Islands on the German North Sea coast. The card was addressed to George Parker Bidder, who played a major role in the development of the MBA. Narurally, MBA staff was thrilled when a letter add ressed to G. P. Bidder, containi ng an origi nal postcard from one of his bottles, arrived at the Ply mouth laboratory in Ap ril 2015. They promptly sent the promised one shilling to the finder. Bidder had devised what today we would call a citizen-science project. H e and his crew cast more than 1,000 &quot;bottom-trailer&quot; bottles into the North Sea between 1904 and 1906 and reported a re r n rate of around 55% . Probably the most significant finding from his experiments was that many of the bottom-trailers got washed up on the English coast, whereas floating bottles would, for the most part, move across the North Sea towards the continent. He deduced that river outflow causes a shoreward flow of denser salt water. Bidder enlisted the help of fis hermen and the publi c to further scientific knowledge, a nd MBA scientists do the same thing today. The modern equivalent of a message in a bottle is the electron ic rag. Tags are attached to individuals of commercially important fish species and transmit signals, which enable scientists to track fish at sea, revealing new, detailed insights into their behavior. If the fish is caught, a reward is paid for the return of the tag. In 2014, MBA scientists deployed unmanned surface vehicles coordinated with the release of tagged fish i nto a marine protected area. For the first time, scientists were able to eavesdrop in real time on the daily lives of iin dividual fish, and find out how they occupy the various habitats within a protected area through time. (www. mba. ac. uk) j:,