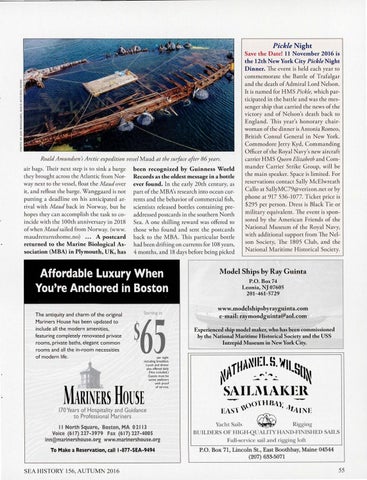 Roald Amundsen&#39;s Arctic expedition vessel Maud at the surface after 86 years. air bags. Thei r next step is to sink a barge they brought across the Atlantic from Norway next to the vessel, Hoat the Maud over it, and reHoat the barge. Wanggaard is not putting a deadline on his anticipated arrival with Ma ud back in Norway, but he hopes they can acco mplish the task to coincide with the lOOth anniversary in 2018 of when M aud sailed from Norway. (www. m audreturnshome .no) .. . A postcard returned to the Marine Biological Association (MBA) in Plymouth, UK, has

b een recognized by Guinness World Records as the oldest message in a bottle ever found. In the early 20th century, as part of the MBA&#39;s research into ocean currents and the behavior of commercial fish, scientists released bottles containing preaddressed postcards in the southern North Sea. A one shilling reward was offered to those who found and sent the postcards back to the MBA. Th is particular bottle had been drifting on currents for 108 years, 4 months, and 18 days before being picked

(Not included.) Guests must be active seafarers with proof

Save the Date! 11November2016 is the 12th New York City Pickle Night Dinner. The event is held each year to commemorate the Battle of Trafalgar and the death of Admiral Lord Nelson . It is named fo r HMS Pickle, wh ich participated in the battle and was the messenger ship that carried the news of the victory and of Nelson&#39;s death back to England. Th is year&#39;s honorary chairwoman of the dinner is Antonia Romeo, British Consul General in New York. Commodore Jerry Kyd , Commanding Officer of the Royal N avy&#39;s new aircraft carrier HMS Queen Elizabeth and Commander Carrier Strike Group, wi ll be the main speaker. Space is limited. For reservations contact Sally McElwreath Callo at SallyMC79@verizo n.net or by phone at 917 536-1077. Ticket price is $295 per person . Dress is Black T ie or military equivalent. The event is sponsored by the American Friends of the National Museum of the Royal Navy, with addit ional support from The Nelson Society, The 1805 Club, and the National Maritime Historical Society.