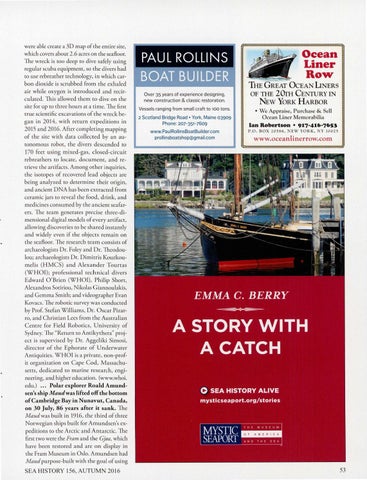 were able create a 3D map of the entire site, which covers about 2.6 acres on the seafloor. The wreck is too deep to dive safely using regular scuba equipment, so the divers had to use rebreather technology, in which carbon dioxide is scrubbed from the exhaled air while oxygen is introduced and recirculated. This allowed them to dive on the site for up to three hours at a time. The first true scientific excavations of the wreck began in 2014, with return expeditions in 2015 and 2016. After completing mapping of rhe sire with dara collected by an autonomous robot, rhe divers descended to 170 feet using mixed-gas, closed-circuit rebrearhers to locate, document, and retrieve the artifacts. Among other inquiries, the isotopes of recovered lead objects are being analyzed to determine their origin, and ancient DNA has been extracted from ceramic jars to reveal the food, drink, and medicines consumed by the ancient seafarers. The team generates precise three-dimensional digital models of every artifact, allowing discoveries to be shared instantly and widely even if the objects remain on the sea Aoor. The research team consists of archaeologists Dr. Foley and Dr. Theodoulou; archaeologists Dr. Dimitris Kourkoumelis (HMCS) and Alexander Tourtas (WHOI); professional technical divers Edward O &#39;Brien (WHOI), Philip Shorr, Alexa ndros Sotiriou, Nikolas Giannoulakis, and Gemma Smith; and videographer Evan Kovacs . The robotic survey was conducted by Prof. Stefan Williams, Dr. Oscar Piza rro, and Christian Lees from the Australian Centre for Field Robotics, University of Sydney. The &quot;Return to Antikythera&quot; project is supervised by Dr. Aggeliki Simosi, director of the Ephorate of Underwater Antiquities. WHOI is a priva te, non-profit organization on Cape C od, Massachusetts, dedicated to marine research , engineering, and higher education. (www.whoi. edu.) . . . Polar explorer Roald Amundsen&#39;s ship Maud was lifted off the bottom of Cambridge Bay in Nunavut, Canada, on 30 July, 86 years after it sank. The Maud was built in 1916, the third of three Norwegian ships built for Amundsen&#39;s expeditions to the Arctic and Antarctic. The first two were the Fram and the Gjoa, which have been restored and are on display in the Fram Museum in Oslo. Amundsen had Maud purpose-built with the goal of using