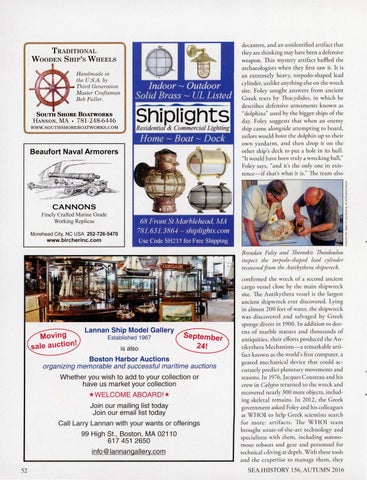 decanters, and an unidentified artifact that they are thinking may have been a defensive weapon. This mys tery artifact baffied the archaeologists when they first saw it. It is an extremely heavy, torpedo-shaped lead cylinder, unlike anything else on the wreck site. Foley sought answers from ancient Greek tex ts by Thucydides, in which he describes defensive armaments known as &quot;dolphins&quot; used by the bigger ships of the day. Foley suggests that when an enemy ship came alongside attempting to board , sailors wo uld hoist the dolph in up to their own ya rdarm, a nd then drop it on the other ship&#39;s deck to put a hole in its hu ll. &quot;It wo uld have been truly a wrecking ball,&quot; Foley says, &quot;a nd it&#39;s the only one in existence-if that&#39;s what it is.&quot; The team also

Boston Harbor Auctions organizing memorable and successful maritime auctions Whether you wish to add to your collection or have us market your collection *WELCOME ABOARD!* Join our mailing list today Join our email list today Call Larry Lannan with your wants or offerings 99 High St., Boston, MA 02110 617 451 2650 info @lannangallery.com 52

confirmed the wreck of a second ancient cargo vessel close by the main shipwreck site. The A ntikythera vessel is the larges t ancient shipwreck ever discove red. Lying in almost 200 feet of water, the shipwreck was discovered and salvaged by G reek sponge dive rs in 1900. In addition to dozens of m a rble statues and thousands of antiquities, their efforts produced the Antiky thera M echanism-a remarkable artifact known as the world &#39;s first computer, a gea red mechanical device that could accurately predict planetary movements and seasons. In 1976, Jacques Cousteau and his crew in Calypso returned to the wreck and recovered nearly 300 more objects, incl uding skeletal remains. In 201 2, the G reek government asked Foley and his colleagues at W H OI to help G reek scientists search for m o re: artifacts. The W H O I tea m bro ugh t sstate-of-the-art technology and specialistss with them, includ ing autonomous ro boots and gear and personnel fo r tech nical &lt;diving at depth. With these tools and the e:expertise to m anage them , they