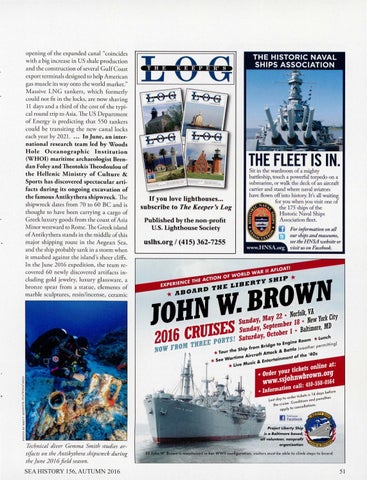 opening of the expanded canal &quot;coincides with a big increase in US shale production and the construction of several G ulf Coas t export terminals designed to help American gas muscle its way onto the world m arker.&quot; Massive LNG rankers, wh ich for m erly could not fit in the locks, are now shaving 11 days and a third of the cost of the typical ro und trip to Asia. The US Department of Energy is predicting that 55 0 tankers could be transiting the new canal locks each year by 2021. ... In June, an international research team led by Woods Hole Oceanographic Institution (WHOI) maritime archaeologist Brendan Foley and Theotokis Theodoulou of the Hellenic Ministry of Culture &amp; Sports has discovered spectacular artifacts during its ongoing excavation of the famous Antikythera shipwreck. The shipwreck dates from 70 to 60 BC and is thought to have been carrying a cargo of G reek luxury goods from the coast of Asia Minor westward to Rome. The G reek island of Antiky thera stands in the middle of this major shipping route in the Aegean Sea, and the ship probably sank in a storm when it sm ashed against the island &#39;s sheer cliffs. In the June 201 6 expedition, the team recovered 60 newly discovered artifac ts including gold jewelry, luxury glassware, a bronze spear fro m a statue, elem ents of marble sculptures, resin/incense, ceramic

Sit in the wardroom of a mighty battleship, touch a powerful torpedo on a submarine, or walk the deck of an aircraft carrier and stand where naval aviators have flown off into history. I t&#39;s all waiting for you when you visit one of the 175 ships of the Historic Naval Ships Association fleet.

For information on all OUT ships and museums, see the HNSA website OT