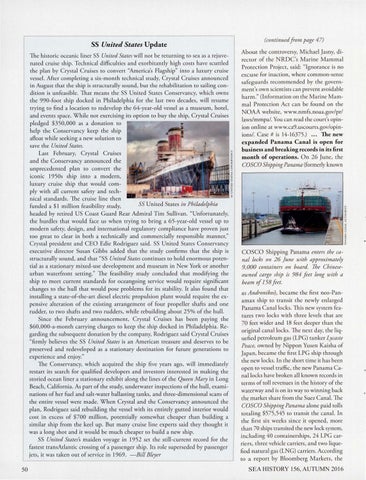 SS United States Update The historic oceanic liner SS United States will not be returning to sea as a rejuvenated cruise ship. Technical difficulties and exorbitantly high costs have scuttled the plan by Crystal Cruises to convert &#39;&#39;America&#39;s Flagship&quot; inro a luxury cruise vessel. After completing a six-month technical study, Crystal Cruises anno unced in August that the ship is structurally so und, but the rehabilitation ro sailing condition is unfeasible. That means the SS United States Conservancy, which owns the 990-foot ship docked in Philadelphia for the last two decades, will resume trying to find a location to redevelop the 64-year-old vessel as a museum, hotel, and events space. While not exercising its option to buy the ship, Crystal Cruises pledged $350,000 as a donation to help the Conservancy keep the ship aAoat while seeking a new solution to save the United States. Last February, Crystal Cruises and the Conservancy announced the unprecedented plan to convert the iconic 1950s ship into a modern, luxury cruise ship that would comply with all current safety and technical standards. The cruise line then SS United States in Philadelphia funded a $1 million feasibility study, headed by retired US Coast Gua rd Rear Admiral Tim Sullivan. &quot;Unfortunately, the hurdles that would face us when trying to bring a 65-year-old vessel up ro modern safety, design, and international regulatory compliance have proven just too great ro clear in both a technically and commercially responsible manner,&quot; Crystal president and CEO Edie Rodriguez said. SS United States Conservancy executive director Susan Gibbs added that the study confirms that the ship is structurally sound, and that &quot;SS United States continues to hold enormous potential as a stationary mixed-use development and museum in New York or another urban waterfront setting.&quot; The feasibility study concluded that modifying the ship to meet current standards for oceangoing service would require significant changes to the hull that would pose problems for its stability. It also found that installing a state-of-the-art diesel electric propulsion plant would require the expensive alteration of the existing arrangement of four propeller shafts and one rudder, to two shafts and two rudders, while rebuilding about 25% of the hull. Since the February announcement, Crystal Cruises has been paying the $60,000-a-month carrying charges to keep the ship docked in Philadelphia. Regarding the subsequent donation by the company, Rodriguez said Crystal Cruises &quot;firmly believes the SS United States is an American treasure and deserves to be preserved and redeveloped as a stationary destination for future generations to experience and enjoy.&quot; The Conservancy, which acquired the ship five years ago, will immediately restart its search for qualified developers and investors interested in making the storied ocean liner a station ary exhibit along the lines of the Queen Mary in Long Beach, Californ ia. As part of the study, underwater inspections of the hull, examinations of her fuel and salt-water ballasting tanks, and three-dimensional scans of the entire vessel were made. When Crystal and the Conservancy announced the plan, Rodriguez said rebuilding the vessel with its entirely gutted interior would cost in excess of $700 million, potentially somewhat cheaper than building a similar ship from the keel up. But many cruise line experts said they thought it was a long shot and it wo uld be much cheaper to build a new ship. SS United States&#39;s maiden voyage in 1952 set the still-current record for the fastest transAtlantic crossing of a passenger ship. Its role superseded by passenger jets, it was taken out of service in 1969. -Bill Bleyer 50

(continued from page 47) About the controversy, Michael Jasny, director of the NRDC&#39;s Marine Mammal Protection Project, said: &quot;Ignorance is no excuse for inaction, where common-sense safeguards recommended by the government&#39;s own scientists can prevent avoidable harm .&quot; (Information on the Marine Mammal Protection Act can be found on the NOAA website, www.nmfs.noaa.gov/pr/ laws/mm pa/. You can read the court&#39;s opinion on line at www.ca9.uscourts.gov/opinions/. Case# is 14 -16375.) ... The new expanded Panama Canal is open for business and breaking records in its first month of operations. On 26 June, the COSCO Shipping Panama (formerly known

COSCO Shipping Panama enters the canal locks on 26 June with approximately 9, 000 containers on board. The Chineseowned cargo ship is 984 feet long with a beam of 158 feet. as Andronikos), became the first neo-Panamax ship ro transit the newly enlarged Panama Canal locks. This new system features two locks with three levels that are 70 feet wider and 18 feet deeper than the original canal locks. The next day, the liquefied petroleum gas (LPG) tanker Lycaste Peace, owned by Nippon Yusen Kaisha of Japan, became the first LPG ship through the new locks. In the short time it has been open to vessel traffic, the new Panama Canal locks have broken all known records in terms of toll revenues in the history of the waterway and is on its way to winning back the market share from the Suez Canal. The COSCO Shipping Panama alone paid tolls rotaling $575,545 to transit the canal. In the first six weeks si nce it opened, more than 70 ships transited the new lock system, including 40 containerships, 24 LPG carriers, three vehicle carriers, and two liquefied natural gas (LNG) carriers. According to a report by Bloomberg Markets, the SEA HISTORY 156, AUTUMN2016