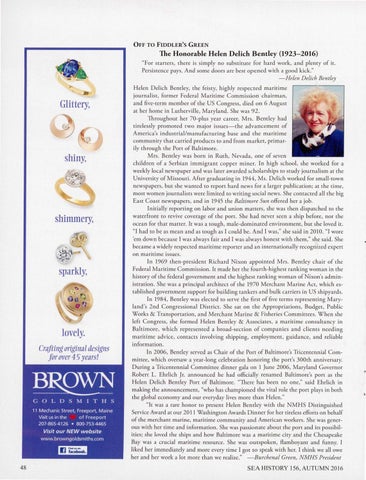 The Honorable Helen Delich Bentley (1923-2016) "For starters, there is simply no substitute for hard work, and plenty of it. Persistence pays. And some doors are best opened with a good kick."

Helen Delich Bentley, the feisty, highly respected maritime journalist, former Federal Maritime Commission chairman, and five-term member of the US Congress, died on 6 August at her home in Lutherville, Maryland. She was 92. Throughout her 70-plus year career, Mrs. Bentley had tirelessly promoted two major issues-the advancement of America's industrial/manufacturing base and the maririme community that carried products to and from market, primarily through the Port of Baltimore. Mrs. Bentley was born in Ruth, Nevada, one of seven children of a Serbian immigrant copper miner. In high school, she worked for a weekly local newspaper and was later awarded scholarships to study journalism at the University of Missouri. After graduating in 1944, Ms. Delich worked for small-town newspapers, but she wanted to report hard news for a larger publication; at the time, most women journalists were limited to writing social news. She contacted all the big East Coast newspapers, and in 1945 the Baltimore Sun offered her a job. Initially reporting on labor and union matters, she was then dispatched to the waterfront to revive coverage of rhe port. She had never seen a ship before, nor the ocean for that matter. It was a tough, male-dominated environment, but she loved it. "I had to be as mean and as tough as I could be. And I was," she said in 2010. "I wore 'em down because I was always fair and I was always honest with them," she said. She became a widely respected maritime reporter and an internationally recognized expert on maritime issues. In 1969 then-president Richard Nixon appointed Mrs. Bentley chair of the Federal Maritime Commission. It made her the fo urth-highest ranking woman in rhe history of the federal government and the highest ranking woman of Nixon's administration. She was a principal architect of the 1970 Merchant Marine Act, which established government support for building rankers and bulk carriers in US shipyards. In 1984, Bentley was elected to serve the first of five terms representing Maryland's 2nd Congressional District. She sat on the Appropriations, Budget, P ublic Works & Transportation, and Merchant Marine & Fisheries Committees. When she left Congress, she formed Helen Bentley & Associates, a maritime consultancy in Baltimore, which represented a broad-section of companies and clients needing maritime advice, contacts involving shipping, employment, guidance, and reliable information . In 2006, Bentley served as Chair of rhe Port of Baltimore's Tricentennial Committee, which oversaw a year-long celebration honoring the port's 300rh anniversary. During a Tricentennial Committee dinner gala on 1 June 2006, Maryland Governor Robert L. Ehrlich ] r. announced he had officially renamed Baltimore's port as the Helen Delich Bentley Port of Baltimore. "There has been no one," said Ehrlich in making the announcement, "who has championed rhe viral role the port plays in both the global economy and our everyday lives more than Helen." "It was a rare honor to present Helen Bentley with the NMHS Distinguished Service Award at our 2011 Washington Awards Dinner for her tireless efforrs on behalf of rhe merchant marine, maritime community and American workers. She was generous with her rime and information. She was passionate about the port and its possibilities; she loved the ships and how Baltimore was a maritime city and the Chesapeake Bay was a crucial maritime resource. She was outspoken, flamboyant and funny. I liked her immediately and more every time I got to speak with her. I think we all owe her and her work a lot more than we realize." -Burchenal Green, NMHS President