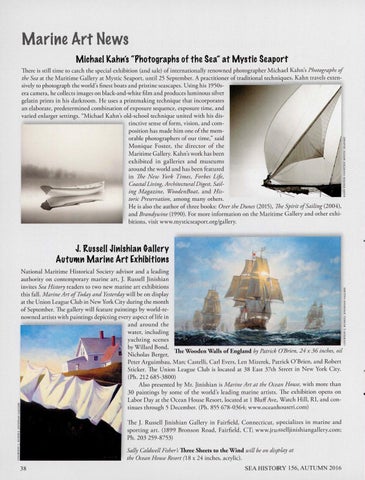 Maritte Art News Michael Kahtfs &quot;Photographs of the Sea&#39;&#39; at Mystic Seaport There is still rime to catch rhe special exhibition (and sale) of internationally renowned photographer Michael Kahn&#39;s Photographs of the Sea at the Maritime Gallery at Mystic Seaport, until 25 September. A practitioner of traditional techniques, Kahn travels extensively to photograph the world &#39;s finest boars and pristine seascapes. Using his 1950sera camera, he collects images on black-and-white film and produces luminous silver gelatin prints in his darkroom. He uses a printmaking technique that incorporates an elaborate, predetermined combination of exposure sequence, exposure time, and varied enlarger settings. &quot;Michael Kahn&#39;s old-school technique united with his distinctive sense of form, vision, and composition has made him one of the memorable photographers of our rime,&quot; said Monique Foster, the director of the Maritime Gallery. Kahn&#39;s work has been exhibited in galleries and museums around the world and has been featured in The New York Times, Forbes Life, Coastal Living, Architectural Digest, Sailing Magazine, WoodenBoat, and Historic Preservation, among many others. He is also the author of three books: Over the Dunes (2015), The Spirit ofSailing (2004), and Brandywine (1990). For more information on the Maritime Gallery and other exhibitions, visit www.mysricseaport.org/gallery.