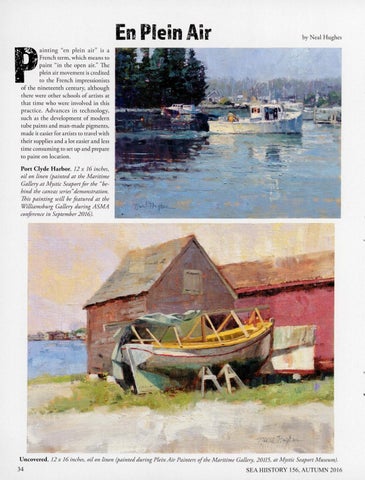 aiming &quot;en plein air&quot; is a French term, which means to paint &quot;in the open air.&quot; The plein air movement is credited to the French impressionists of the nineteenth century, although there were other schools of artists at that time who were involved in this prac tice. Advances in technology, such as the development of modern rube paints and man-made pigments, made it easier for artists to travel with their supplies and a lot easier and less time consuming to set up and prepare to paint on location .

Port Clyde Harbor, 12 x 16 inches, oil on linen (painted at the Maritime Gallery at Mystic Seaport for the &quot;behind the canvas series&quot;demonstration. This painting will be featured at the Williamsburg Gallery during ASMA conference in September 2 016).