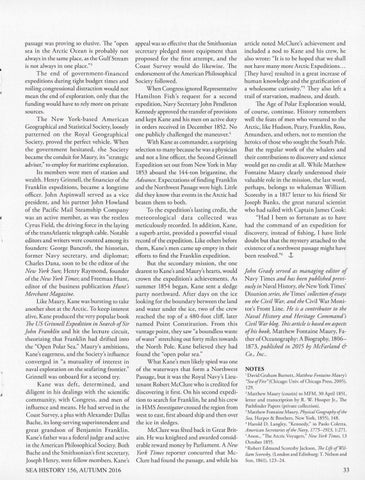 passage was proving so elusive. The "open sea in the Arctic Ocean is probably not always in the same place, as the Gulf Stream is not always in one place." 3 The end of government-financed expeditions during tight budget times and roiling congressional distraction would not mean the end of exploration, only that the funding would have to rely more on private sources. The New York-based American Geographical and Statistical Society, loosely patterned on the Royal Geographical Society, proved the perfect vehicle. When the government hesitated, the Society became the conduit for Maury, its "strategic adviser," to employ for maritime exploration. Its members were men of station and wealth. Henry Grinnell, the financier of the Franklin expeditions, became a longtime officer. John Aspinwall served as a vice president, and his partner John Howland of the Pacific Mail Steamship Company was an active member, as was the restless Cyrus Field, the driving force in the laying of the transAtlantic telegraph cable. Notable editors and writers were counted among its founders: George Bancroft, the historian, former Navy secretary, and diplomat; Charles Dana, soon to be the editor of the New York Sun; Henry Raymond, founder of the New York Times; and Freeman Hunt, editor of the business publication Hunt's

appeal was so effective that the Smithsonian secretary pledged more equipment than proposed for the first attempt, and the Coast Survey would do likewise. The endorsement of the American Philosophical Society followed. When Congress ignored Representative Hamilton Fish's request for a second expedition, Navy Secretary John Pendleton Kennedy approved the transfer of provisions and kept Kane and his men on active duty in orders received in December 1852. No one publicly challenged the maneuver. 4 With Kane as commander, a surprising selection to many because he was a physician and not a line officer, the Second Grinnell Expedition set out from New York in May 1853 aboard the 144-ton brigantine, the Advance. Expectations of finding Franklin and the Northwest Passage were high. Little did they know that events in the Arctic had beaten them to both. To the expedition's lasting credit, the meteorological data collected was meticulously recorded. In addition, Kane, a superb artist, provided a powerful visual record of the expedition. Like others before them, Kane's men came up empty in their efforts to find the Franklin expedition. But the secondary mission, the one dearest to Kane's and Maury's hearts, would crown the expedition's achievements. As summer 1854 began, Kane sent a sledge party northward. After days on the ice Merchant Magazine. Like Maury, Kane was bursting to take looking for the boundary between the land another shot at the Arctic. To keep interest and water under the ice, two of the crew alive, Kane produced the very popular book reached the top of a 480-foot cliff, later The US Grinnell Expedition in Search ofSir named Point Constitution. From this john Franklin and hit the lecture circuit, vantage point, they saw "a boundless waste theorizing that Franklin had drifted into of water" stretching out forty miles towards the "Open Polar Sea." Maury's ambitions, the North Pole. Kane believed they had Kane's eagerness, and the Society's influence found the "open polar sea." converged in "a mutuality of interest in What Kane's men likely spied was one naval exploration on the seafaring frontier." of the waterways that form a Northwest Grinnell was onboard for a second try. Passage, but it was the Royal Navy's LieuKane was deft , determined, and tenant Robert McClure who is credited for diligent in his dealings with the scientific discovering it first. On his second expedicommunity, with Congress, and men of tion to search for Franklin, he and his crew influence and means . He had served in the in HMS Investigator crossed the region from Coast Survey, a plus with Alexander Dallas west to east, first aboard ship and then over Bache, its long-serving superintendent and the ice in sledges. McClure was fered back in Great Britgreat grandson of Benjamin Franklin. Kane's father was a federal judge and active ain. He was knighted and awarded considin the American Philosophical Society. Both erable reward money by Parliament. A New Bache and the Smithsonian's first secretary, York Times reporter concurred that McJoseph Henry, were fellow members. Kane's Clure had found the passage, and while his

article noted McClure's achievement and included a nod to Kane and his crew, he also wrote: "It is to be hoped that we shall not have many more Arctic Expeditions ... [They have] resulted in a great increase of human knowledge and the gratification of a wholesome curiosity." 5 They also left a trail of starvation, madness, and death. The Age of Polar Exploration would, of course, continue. History remembers well the feats of men who ventured to the Arctic, like Hudson, Peary, Franklin, Ross, Amundsen, and others, not to mention the heroics of those who sought the South Pole. But the regular work of the whalers and their contributions to discovery and science would get no credit at all. While M atthew Fontaine Maury clearly understood their valuable role in the mission , the last word, perhaps, belongs to whaleman William Scoresby in a 1817 letter to his friend Sir Joseph Banks, the great natural scientist who had sailed with Captain James Cook: "Had I been so fortunate as to have had the command of an expedition for discovery, instead of fishing, I have little doubt but that the mys tery attached to the existence of a northwest passage might have been resolved."6 ,!,

john Grady served as managing editor of Navy Times and has been published previously in Naval History, the New York Times' Disunion series, the Times' collection ofessays on the Civil War, and the Civil War Monitor's Front Line. He is a contributor to the Naval History and Heritage Command's Civil War blog. This article is based on aspects ofhis book, Matthew Fontaine Maury, Father of Oceanography: A Biography, 18061873, published in 2015 by McFarland &