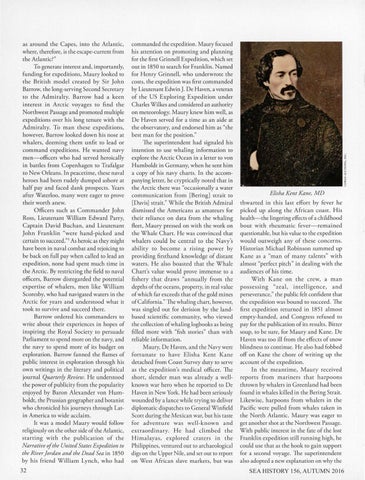 as around rhe Capes, into rhe Atlantic, where, therefore, is the escape-current from the Atlantic?&quot; To generate interest and, importantly, funding for expeditions, Maury looked to the British model created by Sir John Barrow, the long-serving Second Secretary to the Admiralty. Barrow had a keen interest in Arctic voyages ro find the Northwest Passage and promoted multiple expeditions over his long tenure with rhe Admiralty. To man these expeditions, however, Barrow looked down his nose at whalers, deeming them unfit to lead or command expeditions. He wanted navy men-officers who had served heroi cally in battles from Copenhagen to Trafalgar to New Orleans. In peacetime, these naval heroes had been rudely dumped ashore at half pay and faced dank prospects. Years after Waterloo, many were eager to prove their worth anew. Officers such as Commander John Ross, Lieutenant William Edward Parry, Captain David Buchan, and Lieutenant John Franklin &quot;were hand-picked and certain to succeed.&quot;9 As heroic as they might have been in naval combat and rejoicing to be back on full pay when called to lead an expedition, none had spent much time in rhe Arctic. By restricting the field ro naval officers, Barrow disregarded rhe potential expertise of whalers , men like W illiam Scoresby, who had navigated waters in the Arctic for years and understood what it rook to survive and succeed there. Barrow ordered his commanders to write about their experiences in hopes of inspiring the Royal Society to persuade Parliament to spend more on the navy, and the navy to spend more of its budget on exploration. Barrow fanned the flames of public interest in exploration through his own writings in the literary and political journal Quarterly Review. He understood the power of publicity from the popularity enjoyed by Baron Alexander von Humboldt, the Prussian geographer and botanist who chronicled his journeys through Larin America to wide acclaim. It was a model Maury would follow religiously on the other side of the Atlantic, starting with the publication of the Narrative ofthe United States Expedition to the River Jordan and the Dead Sea in 1850 by his friend W illiam Lynch, who had

commanded rhe expedition . Maury focused his at tention on promoting and planning for the first Grinnell Expedition, which set out in 1850 to search for Franklin. Named for Henry Grinnell, who underwrote the costs, the expedition was first commanded by Lieutenant Edwin J. De H aven, a veteran of rhe US Exploring Expedition under Charles Wilkes and considered an authority on meteorology. Maury knew him well, as De Haven served for a rime as an aide at the observatory, and endorsed him as &quot;the best man for the position.&quot; The superintendent had signaled his intention to use whaling information to explore the Arctic Ocean in a letter to von Humboldt in Germany, when he sent him a copy of his navy charts. In the accompanying letter, he cryptically noted that in the Arctic there was &quot;occasionally a water communication from [Bering] strait to [Davis] strait.&quot; While the British Admiral dismissed the Americans as amateurs for their reliance on data from the whaling fleer, Maury pressed on with the work on the Whale Chart. He was convinced that whalers could be central to the Navy&#39;s ability to become a rising power by providing firsthand knowledge of distant waters. He also boasted rhar the Whale Chart&#39;s value would prove immense to a fishery rhar draws &quot;annually from rhe depths of rhe oceans, property, in real value of which far exceeds that of the gold mines of California.&quot; The whaling chart, however, was singled our for derision by the landbased scientific community, who viewed rhe collection of whaling logbooks as being filled more with &quot;fish stories&quot; than with reliable information. Maury, De H aven, and the Navy were fortunate to have Eli sh a Kent Kane detached from Coast Survey duty to serve as the expedition&#39;s medical officer. The short, slender man was already a wellknown war hero when he reported to D e Haven in New York. H e had been seriously wounded by a lance while trying to deliver diplomatic dispatches to General Winfield Scott during the Mexican war, bur his taste for advenrure was well-known and ex traordinary. He had climb ed the Himalayas, explored craters in the Philippines, ventured our to archaeological digs on the Upper Nile, and set out to report on W es t African slave marke rs, bur was

thwarted in this last effort by fever he picked up along rhe African coast. His health-the lingering effects of a childhood bout with rheumatic fever-remained questionable, bur his value to the expedition would outweigh any of these concerns. Historian Michael Robinson summed up Kane as a &quot;man of many talents&quot; with almost &quot;perfect pitch&quot; in dealing with the audiences of his rime. With Kane on the crew, a man possessing &quot;zeal, intelligence , and perseverance,&quot; the public felt confident rhar the expedition was bound to succeed. The first expedition returned in 1851 almost empty-handed, and Congress refused to pay for rhe publication ofirs results. Bitter soup, to be sure, for Maury and Kane. De Haven was too ill from the effects of snow blindness to continue. He also had fobbed off on Kane the chore of writing up the acco unt of the expedition. In the meanrime, Maury received reports from mariners that harpoons thrown by whalers in Greenland had been found in whales killed in the Bering Strait. Likewise, harpoons from whalers in the Pacific were pulled from whales taken in rhe North Atlantic. Maury was eager to get another shot at the Northwest Passage. With public interest in the fare of rhe lost Franklin expedition still running high, he could use rhar as the hook to gain support for a second voyage. The superintendent also adopted a new explanation on why the