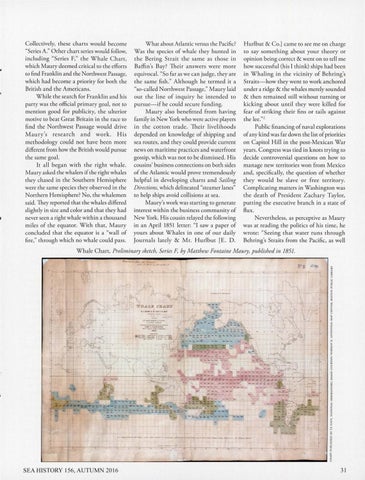 Collectively, these charts would become &quot;Series A.&quot; Other chart series would follow, including &quot;Series F,&quot; the Whale Chart, which Maury deemed critical to the efforts to find Franklin and the No rthwest Passage, which had become a priority for both the British and the Americans. While the search for Franklin and his party was the official primary goal, not to mention good for publicity, the ulterior motive to beat G reat Britain in the race to find the Northwest Passage wo uld drive Maury &#39;s research and work. His methodology could not h ave been more different from how the British would pursue the same goal. It all began with the right whale. Maury asked the whalers if the right whales they chased in the Southern Hemisphere were the same species they observed in the Northern Hemisphere? No, the whalemen said. They reported that the whales differed slightly in size and color and that they had never seen a right whale within a thousand miles of the equarnr. With that, Maury concluded that the equator is a &quot;wall of fire,&quot; through which no whale could pass.

What about Atlantic versus the Pacific? Was the species of whale they hunted in the Bering Strait the same as those in Baffin&#39;s Bay? Their answers were more equivocal. &quot;So far as we ca n judge, they are the same fi sh .&quot; Although he termed it a &quot;so-called Northwest Passage,&quot; Maury laid out the line of inquiry h e intended to pursue-if he could secure fundin g. Maury also benefitted from h aving fam ily in New York who were active players in the cotton trade. Their livelihoods depended on knowledge of shipping and sea routes, and they could provide current news on maritime practices and waterfront gossip, which was not to be dismissed. His cousins&#39; business connections on both sides of the Atlantic would prove tremendously helpful in developing charts and Sailing Directions, which delineated &quot;steamer lanes&quot; to help ships avoid collisions at sea. Maury&#39;s work was starting to generate interest within the business community of New York. His cousin relayed the following in an April 1851 letter: &quot;I saw a paper of yo urs about Whales in one of our d aily Journals lately &amp; Mr. Hurlbut [E . D .

Hurlbut &amp; Co.] came to see me on charge to say som ething about yo ur theory or opinion being correct &amp; went on to tell me how successful (his I think) ships had been in Whaling in the vicinity of Behring&#39;s Straits-how they went to work anchored under a ridge &amp; the whales merely sounded &amp; then remained still without turning or kicking about until they were killed for fear of striking their fins or tails agai nst the lee.&quot; 2 Public financing of naval explorations of any kind was far down the list of priorities on Capitol Hill in the post-Mexican War years. Congress was tied in knots trying to decide controversial questions on how to m anage new territories won from Mexico and, specifically, the question of whether they wo uld be slave or free territory. Complicating matters in Washington was the d eath of President Zachary Taylor, putting the executive branch in a state of flu x. Nevertheless, as perceptive as Maury was at reading the politics of his time, he wrote: &quot;Seeing that water runs through Behring&#39;s Straits from the Pacific, as well