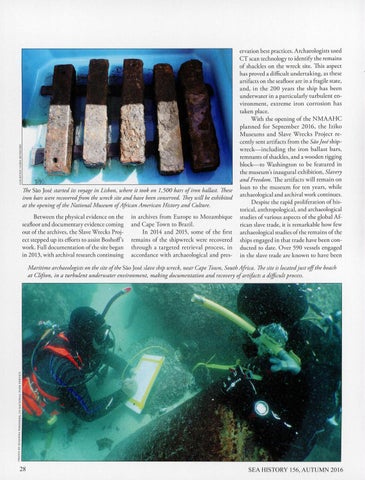 The Sao Jose started its voyage in Lisbon, where it took on 1,500 bars of iron ballast. These iron bars were recovered from the wreck site and have been conserved. They will be exhibited at the opening ofthe National Museum ofAfrican American History and Culture.

Between the physical evidence on the seafloor and documentary evidence coming out of the archives, the Slave Wrecks Project stepped up its efforts to assist Boshoff's work. Full documentation of the site began in 2013, with archival research continuing

in archives from Europe to Mozambique and Cape Town ro Brazil. In 2014 and 2015, some of the first remains of the shipwreck were recovered through a targeted retrieval process, in accordance with archaeological and pres-

ervation best practices. Archaeologists used CT scan technology to identify the remains of shackles on the wreck site. This aspect has proved a difficult undertaking, as these artifacts on the seafloor are in a fragile state, and, in the 200 years the ship has been underwater in a particularly turbulent environment, extreme iron corrosion has taken place. With the opening of the NMAAHC planned for September 2016, the lziko Museums and Slave Wrecks Project recently sent artifacts from the Sao Jose shipwreck-including the iron ballast bars, remnants of shackles, and a wooden rigging block-to Washington to be featured in the museum's inaugural exhibition, Slavery and Freedom. The artifacts will remain on loan to the museum for ten yea rs, while archaeological and archival work continues. Despite the rapid proliferation of historical, anthropological, and archaeological studies of vario us aspects of the global African slave trade, it is remarkable how few archaeological studies of the remains of the ships engaged in that trade have been conducted to date. Over 590 vessels engaged in the slave trade are known to have been