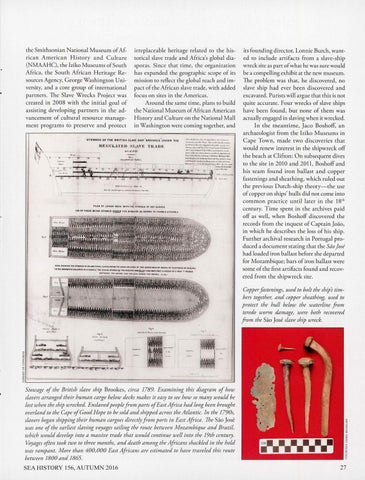 irreplaceable heritage related to the historical slave trade and Africa's global diasporas. Since that time, the organization has expanded the geographic scope of its mission to reflect the global reach and impact of the African slave trade, with added focus on sites in the Americas. Around the same time, plans to build the National M useum of African American History and C ulture on the National Mall in Washington were coming together, and

its founding director, Lonnie Burch, wanted to include artifacts from a slave-ship wreck site as part of what he was sure would be a compelling exhibit at the new museum. The problem was that, he discovered, no slave ship h ad ever been discovered and excavated. Purists will argue that this is not quite accurate. Four wrecks of slave ships have been found, but none of them was actually engaged in slaving when it wrecked. In the m eantime, Jaco Bosh off, an archaeologist from the Iziko Museums in Cap e Town, made two discoveries that would renew interest in the shipwreck off the beach at Clifton: On subsequent dives to the site in 2010 and 2011 , Boshoff and his team fo und iron ballast and copper fastenings and sheathing, which ruled out the previous Dutch-ship theory-the use of copper on ships' hulls did nor come into common practice until later in the 18'h century. Time spent in the archives paid off as well, when Boshoff discovered the records from the inquest of Captain Joao, in which he describes the loss of his ship. Further archival research in Portugal produced a document staring that the Sao Jose had loaded iron ballast before she departed for Mozambique; bars of iron ballas t were some of the first artifacts found and recovered from the shipwreck site.

Stowage of the British slave ship Brookes, circa 1789. Examining this diagram of how slavers arranged their human cargo below decks makes it easy to see how so many would be lost when the ship wrecked. Enslaved people from parts ofEast Africa had long been brought overland to the Cape of Good Hope to be sold and shipped across the Atlantic. In the 1790s, slavers began shipping their human cargoes directly from ports in East Africa. The Sao Jose was one of the earliest slaving voyages sailing the route between Mozambique and Brazil, which would develop into a massive trade that would continue well into the 19th century. Voyages often took two to three months, and death among the Africans shackled in the hold was rampant. More than 400, 000 East Africans are estimated to have traveled this route between 1800 and 1865. SEA HISTORY 156, AUTUMN 20 16