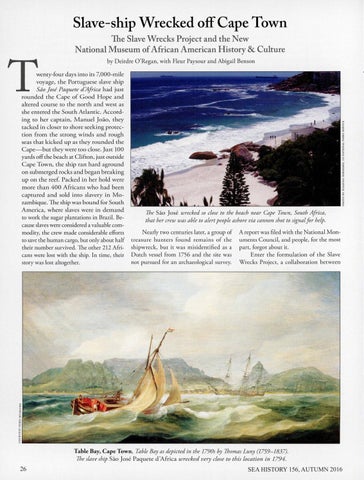 wenty-four days into its 7,000-mile voyage, the Portuguese slave ship Sao Jose Paquete d&#39;Africa had just rounded the Cape of Good Hope and altered course to the north and west as she entered the South Atlantic. According to her captain, Manuel J oao, they tacked in closer to shore seeking protection from the strong winds and rough seas that kicked up as they rounded the Cape-bur they were too close.Just 100 yards off the beach at Clifton, just outside Cape Town, the ship ran hard aground on submerged rocks and began breaking up on the reef Packed in her hold were more than 400 Africans who h ad been captured and sold into slavery in Mozambique. The ship was bound for South America, where slaves were in demand to work the sugar plantations in Brazil. Because slaves were considered a valuable commodity, the crew made considerable efforts to save the human cargo, but only about half their number survived. The other 212 Africans were lost with the ship. In time, their story was lost altogether.

The Sao Jose wrecked so close to the beach near Cape Town, South Africa, that her crew was able to alert p eople ashore via cannon shot to signal for help. Nearly two centuries later, a group of treasure hunters found remains of the shipwreck, but it was misidentified as a Dutch vessel from 1756 and the site was not pursued for an archaeological survey.

A report was filed with the National Monuments Council, and people, for the most part, forgot about it. Enter the formu lation of the Slave Wrecks Project, a collaboration between