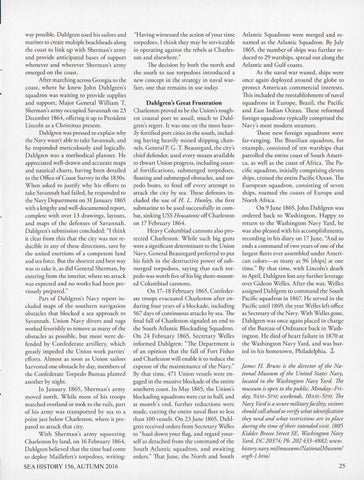 way possible. Dahlgren used his sailors and marines to create multiple beachheads along the coast to link up with Sherman&#39;s army and provide anticipated bases of support whenever and wherever Sherman&#39;s army emerged on the coast. After marching across Georgia to the coast, where he knew John Dahlgren&#39;s squadron was waiting to provide supplies and support, Major General William T. Sherman&#39;s army occupied Savannah on 23 December 1864, offering it up to President Lincoln as a Christmas present. Dahlgren was pressed to explain why rhe Navy was n&#39;t able to rake Savannah, and he responded meticulously and logically. Dahlgren was a methodical planner. He appreciated well-drawn and accurate maps and nautical charts, having been derailed to the Office of Coast Survey in the 1830s. When asked to justify why his efforts to rake Savannah had failed, he responded to the Navy Department on 31January1865 with a lengthy and well-documented report, complete with over 13 drawings, layo uts, and maps of the defenses of Savannah. Dahlgren&#39;s submission concluded: &quot;I think it clear from this that the city was not reducible in any of these directions, save by the united exertions of a competent land and sea force. Bur the shortest and best way was to rake it, as did General Sherman, by entering from the interior, where no attack was expected and no works had been previously prepared.&quot; Part of Dahlgren&#39;s Navy report included maps of the southern navigation obstacles that blocked a sea approach to Savannah. Union Navy divers and rugs worked feverish ly to remove as many of the obstacles as possible, but most were defended by Confederate artillery, which greatly impeded the Union work parries&#39; efforts. Almost as soon as Un ion sai lors harvested one obstacle by day, members of the Confederate Torpedo Bureau planted another by night. In January 1865, Sherman&#39;s army moved north. While most of his troops marched overland or took to the rails, part of his army was transported by sea to a point just below C harleston, where it prepared ro attack that city. With Sherma n&#39;s army squeezing Charlesron by land, on 16 February 1864, Dahlgren believed that the time had come ro deploy Mailleferr&#39;s rorpedoes, writing: SEA HISTORY 156, AUTUMN 2016

&quot;Having witnessed the action of your time rorpedoes , I think they may be serviceable in operating against the rebels at Charlesron and elsewhere.&quot; The decision by both the north and the south ro use rorpedoes introduced a new concept in the strategy in naval warfare, one that remains in use roday. Dahlgren&#39;s Great Frustration Charlesron proved to be the Union&#39;s toughest coastal port ro assail, much ro Dahlgren&#39;s regret. Ir was one on the most heavily fortified port cities in the south, including having heavily mined shipping channels . General P. G. T. Beauregard, the city&#39;s chief defender, used every means available to thwart Union progress, including coastal fortifications, submerged torpedoes, floating and submerged obstacles, and rorpedo boats, ro fend off every attempt to attack the city by sea. These defenses included the use of H. L. Hunley, the first submarine ro be used successfully in combat, sinking USS Housatonic off Charlesron on 17 February 1864. Heavy Columbiad cannons also protected C h arlesron. While such big guns were a significant determinant ro the Union Navy, General Beauregard preferred ro put his faith in the destructive power of submerged rorpedoes, saying that each rorpedo was worth five of his big shore-mounted Columbiad cannons. On 17-18 February 1865, Confederate troops evacuated Charleston after enduring four yea rs of a blockade, including 567 days of continuous attacks by sea. The final fa ll of Charlesron signaled an end tO the South Atlantic Blockading Squadron. On 24 February 1865, Secretary Welles informed Dahlgren: &quot;The Department is of an opinion that the fa ll of Fort Fisher and Charlesron will enable it ro reduce the expense of the maintenance of the Navy.&quot; By that rime, 471 Union vessels were engaged in the massive blockade of the entire southern coast. In May 1865, the Un ion&#39;s blockading squadrons were cur in half, and at month &#39;s end, further reductions were made, cutting the entire naval fleet to less than 100 vessels. On 23 June 1865, Dahlgren received orders from Secretary Welles ro &quot;haul down your flag, and regard yo urself as detached from the command of the Sourh Atlantic squadron, and awaiting orders.&quot; That June, the North and South

Atlantic Squadrons were merged and renamed as the Atlantic Squadron. By July 1865, the number of ships was further reduced ro 29 warships, spread out along the Atl antic and Gu lf coasts. As the naval war waned, ships were once again deployed around the globe tO protect American commercial interests. This included the reestablishment of naval squadrons in E urope, Brazil, the Pacific and East Indian Ocean. These reformed foreign squadrons typically comprised the Navy&#39;s most modern steamers. These new foreign squadrons were far-ranging. The Brazilian squadron, for example, consisted of ten warships that patrolled the entire coast of South America, as well as the coast of Africa. The Pacific squadron, initially comprising eleven ships, cruised the entire Pacific Ocean. The European squadron, consisting of seven ships, roamed the coasts of Europe and North Africa. On 9 June 1865, John Dahlgren was ordered back to Washington . Happy to return to the Washington Navy Yard, he was also pleased with his accomplishments, recording in his diary on 17 June, &quot;And so ends a command of two years of one of the largest fleets ever assembled under American colors-as many as 96 [ships] at one time.&quot; By that time, with Lincoln&#39;s death in April, Dahlgren lost any further leverage over Gideon Welles. After the war, Welles assigned Dahlgren ro command the South Pacific squadron in 1867. He served in the Pacific until 1869, the year Welles left office as Secretary of the Navy. With Welles gone, Dahlgren was once agai n placed in charge of the Bureau of Ordnance back in Washingron . He died of heart fai lure in 1870 at the Washington Navy Yard, and was buried in his hometown, Philadelphia . ..t James H. Bruns is the director of the National Museum of the United States Navy, located in the Washington Navy Yard. The museum is open to the public, Monday-Friday, 9AM-5PM; weekends, 10AM-5PM. The Navy Yard is a secure military facility; visitors should call ahead to verifj what identification they need and what restrictions are in place during the time oftheir intended visit. (805 Kidder Breese Street SE, Washington Navy Yard, DC 20374; Ph. 202 433-4882; www. history. navy. millmuseums/NationalMuseuml org8-1.htm)