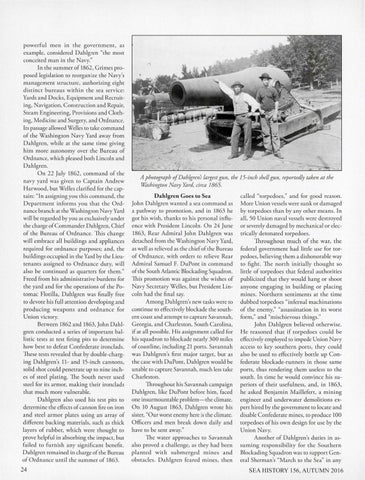 powerful men in the government, as example, considered D ahlgren "the most co nceited man in the Navy." In the summer of 1862 , Grimes proposed legislation to reorganize the Navy's management structure, authorizing eight distinct bureaus within the sea serv ice: Yards and Docks, Equipment and Recruiting, Navigation, Construction and Repair, Steam Engineering, Provisions and Clothing, Medicine and Surgery, and Ordnance. Its passage allowed Welles to take command of the Washington Navy Yard away from D ahlgren, while at the same time giving him more autonomy over the Bureau of Ordnance, which pleased both Lincoln and D ahlgren. On 22 July 1862, command of the navy yard was given to Captai n Andrew H arwood, but Welles clarified for the captain: "In assigning yo u this command , the D epartment in fo rms yo u that the Ordnance branch at the Washingron Navy Yard will be regarded by yo u as exclusively under the charge of Commander Dahlgren, Chief of the Bureau of Ordnance. Thi s change will embrace all buildings and appliances required for ordnance purposes; and, the buildings occupied in the Yard by the Lieutenants assigned to Ordnance duty, will also be continued as quarters for them." Freed from his administrative burdens for the ya rd and for the operations of the Potomac Flotilla, D ahlgren was finally free to devote his full attention developing and producing weapons and ordn a nce for Union victory. Between 1862 and 1863, John Dahlgren conducted a series of important ballistic tests at test firing pits to determ ine how best to defeat Confederate ironclads. These tests revealed that by double-charging Dahlgren's 11- and 15-inch cannons, solid shot could penetrate up to nine inches of steel plating. The South never used steel for its armor, making their ironclads that much more vulnerable. Dahlgren also used his tes t pits to determine the effects of can non fire on iron and steel armor plates using an array of different backing materials, such as thick laye rs of rubber, which were thought to prove helpful in absorbing the impact, but failed to furnish any significant benefi t. Dahlgren remained in charge of the Bureau of Ordnance until the summer of 1863.

A photograph ofDahlgren's Largest gun, the 15-inch sheLL gun, reportedly taken at the Washington Navy Yard, circa 1865. Dahlgren Goes to Sea John Dahlgren wanted a sea command as a pathway to promotion, and in 1863 he got his wish, thanks to his personal influence with President Lincoln. O n 24 June 1863, Rear Admiral Joh n D ahlgren was detached from the Washington Navy Yard, as well as relieved as the chief of the Bureau of Ordnance, with orders to rel ieve Rear Admiral Samuel F. DuPont in command of the South Atlantic Blockading Squadron. This promotion was against the wishes of Navy Secretary Welles, but President Lincoln had the final say. Among Dahlgren's new tasks were to continue to effectively blockade the southern coast and attempt to capture Savannah, Georgia, and C harleston, South Carolina, if at all possible. His assignment called for his squadron to blockade nearly 300 miles of coastline, including 21 ports. Savannah was Dahlgren's first major target, bur as the case with DuPont, Dahlgren would be unable to capture Savannah, much less take C harleston. Throughout his Savannah campaign Dahlgren, like DuPont before him, faced one insurmountable problem- the climate. On 10 Aug ust 1863, Dahlgren wrote his sister, "Our worst enemy here is the climate. Officers and men break down daily and have to be sent away." The water approaches to Savannah also proved a challenge, as they had been planted with submerged mines and obstacles. Dahlgren feared mines, then

called "torpedoes," and for good reason. More Union vessels were sunk or damaged by torpedoes than by any other means. In all, 50 Union naval vessels were destroyed or severely damaged by mechanical or electrically detonated torpedoes. Throughout much of the war, the federal governmem had little use for torpedoes, believing them a dishonorable way to fight. The north initially thought so little of torpedoes char federal authorities publicized chat they would hang or shoot anyone engaging in building or placing mines. Northern sentiments at the time dubbed torpedoes "infernal machinations of the enemy," "assassination in its worst form," and "mischievous things." John Dahlgren believed otherwise. H e reasoned that if torpedoes could be effectively employed to impede Union Navy access to key southern ports, they could also be used to effectively bottle up Confederate blockade-runners in those same ports, thus rendering them useless to the south. In time he would convince his superiors of their usefulness, and, in 1863, he asked Benjamin M aillefert, a mining engineer and underwater demolitions expert hired by the government to locate and disable Confederate mines, to produce 100 torpedoes of his own design for use by the Union Navy. Another of Dahlgren's duties in assumin g responsibility for the Southern Blockading Squadron was to support General Sherman's "March to the Sea" in any