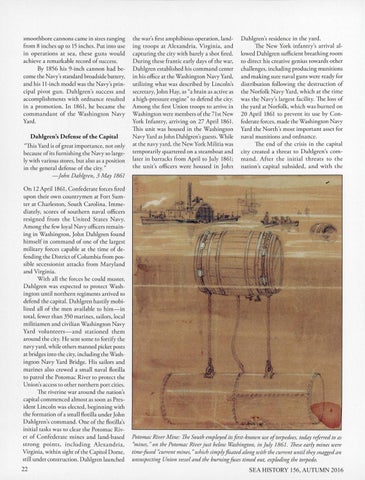 smoothbore cannons came in sizes ranging from 8 inches up to 15 inches. Put into use in operations at sea, these guns would achieve a remarkable record of success. By 1856 his 9-inch cannon had become the Navy&#39;s standard broadside battery, and his 11-inch model was the Navy&#39;s principal pivot gun. Dahlgren&#39;s success and accomplishments with ordnance resulted in a promotion. In 1861, he became the commandant of the Washington Navy Yard. Dahlgren&#39;s Defense of the Capital &quot;This Yard is of great importance, not only because of its furnishing the Navy so largely with various stores, but also as a position in the general defense of the city.&quot; -john Dahlgren, 3May1861 On 12 April 1861, Confederate forces fired upon their own countrymen at Fort Sumter at Charleston, South Carolina. Immediately, scores of southern naval officers resigned from the United States Navy. Among the few loyal Navy officers remaining in Washington, John Dahlgren found himself in command of one of the largest military forces capable at the time of defending the District of Columbia from possible secessionist attacks from Maryland and Virginia. With all the forces he could muster, Dahlgren was expected to protect Washington until northern regiments arrived to defend the capital. Dahlgren hastily mobilized all of the men available to him-in total, fewer than 350 marines, sailors, local militiamen and civilian Washington Navy Yard volunteers-and stationed them around the city. He sent some to fortify the navy yard, while others manned picket posts at bridges into the city, including the Washington Navy Yard Bridge. His sailors and marines also crewed a small naval Botilla to patrol the Potomac River to protect the Union&#39;s access to other northern port cities. The riverine war around the nation&#39;s capital commenced almost as soon as President Lincoln was elected, beginning with the formation of a small Botilla under John Dahlgren&#39;s command. One of the Borilla&#39;s initial tasks was to clear the Potomac River of Confederate mines and land-based strong points, including Alexandria, Virginia, within sight of the Capitol Dome, still under construction. Dahlgren launched 22

the war&#39;s first amphibious operation, landing troops at Alexandria, Virginia, and capturing the city with barely a shot fired. During these frantic early days of the war, Dahlgren established his command center in his office at the Washington Navy Yard, utilizing what was described by Lincoln&#39;s secretary, John Hay, as &quot;a brain as active as a high-pressure engine&quot; to defend the city. Among the first Union troops to arrive in Washington were members of the 71st New York Infantry, arriving on 27 April 1861. This unit was housed in the Washington Navy Yard as John Dahlgren&#39;s guests. While at the navy yard, the New York Militia was temporarily quartered on a steamboat and later in barracks from April to July 1861 ; the unit&#39;s officers were housed in John

Dahlgren&#39;s residence in the yard. The New York infantry&#39;s arrival allowed Dahlgren sufficient breathing room to direct his creative genius towards other challenges, including producing munitions and making sure naval guns were ready for distribution following the destruction of the Norfolk Navy Yard, which at the time was the Navy&#39;s largest facility. The loss of the yard at Norfolk, which was burned on 20 April 1861 to prevent its use by Confederate forces, made the Washington Navy Yard the North&#39;s most important asset for naval munitions and ordnance. The end of the crisis in the capital city created a threat to Dahlgren&#39;s command. After the initial threats to the nation&#39;s capital subsided, and with the

Potomac River Mine: The South employed its first-known use oftorpedoes, today referred to as &quot;mines,&quot; on the Potomac River just below Washington, in July 1861. These early mines were time-fused &quot;current mines, &quot;which simply floated along with the current until they snagged an unsuspecting Union vessel and the burningfoses timed out, exploding the torpedo.