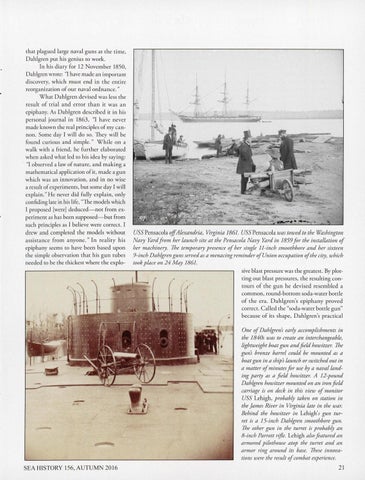 that plagued large naval guns at the time, Dahlgren put his genius to work. In his diary for 12 November 1850, Dahlgren wrote: &#39;1 have made an important discovery, which must end in the entire reorganization of our naval ordnance.&quot; What Dahlgren devised was less the resu lt of trial and error than it was an epiphany. As Dahlgren described it in his personal journal in 1863, &#39;1 have never made known the real principles of my cannon. Some day I will do so. They will be found curious and simple.&quot; Wh ile on a walk with a friend, he further elaborated when asked what led to his idea by saying: &#39;1 observed a law of nature, and making a mathematical application of it, made a gun which was an innovation, and in no wise a result of experiments, but some day I will explain. &quot; He never did fully explain, only confiding late in his life, &quot;The models which I proposed [were] deduced-not from experiment as has been supposed-but from such principles as I believe were correct. I drew and completed the models witho ut assistance from anyone. &quot; In reality his epiphany seems to have been based upon the simple observation that his gun tubes needed to be the thickest where the explo-

USS Pensacola offAlexandria, Virginia 1861. USS Pensacola was towed to the Washington Navy Yard from her launch site at the Pensacola Navy Yard in 1859 for the installation of her machinery. The temporary presence of her single 11-inch smoothbore and her sixteen 9-inch Dahlgren guns served as a menacing reminder of Union occupation ofthe city, which took place on 24 May 1861. sive blast pressure was the greatest. By plotting our blast pressures, the resulting contours of the gun he devised resembled a common, round-bottom soda-water bottle of the era. Dahlgren&#39;s epiphany proved correct. Called the &quot;soda-water bottle gun&quot; because of its shape, Dahlgren&#39;s practical One of Dahlgren&#39;s early accomplishments in the 1840s was to create an interchangeable, lightweight boat gun and field howitzer. The gun&#39;s bronze barrel could be mounted as a boat gun in a ship&#39;s launch or switched out in a matter of minutes for use by a naval landing party as a field howitzer. A 12-pound Dahlgren howitzer mounted on an iron field carriage is on deck in this view of monitor USS Lehigh, probably taken on station in the James River in Virginia late in the war. Behind the howitzer in Lehigh&#39;s gun turret is a 15-inch Dahlgren smoothbore gun. The other gun in the turret is probably an 8-inch Parrott rifle. Lehigh also featured an armored pilothouse atop the turret and an armor ring around its base. These innovations were the result of combat experience.