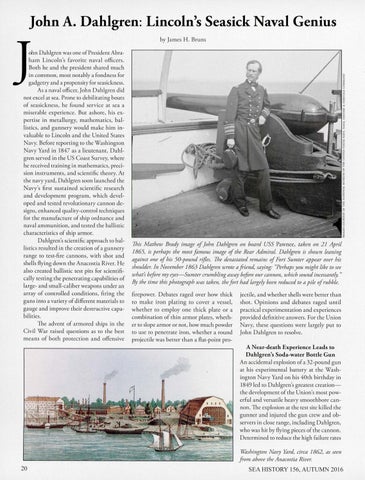 John A. Dahlgren: Lincoln's Seasick Naval Genius by James H. Bruns ohn Dahlgren was one of President Abraham Lincoln's favo rite n aval officers. Both he and the president shared much in common, most notably a fondness for gadgetry and a propensity fo r seasickness. As a naval officer, John D ahlgren did not excel at sea. Prone to debilitating bouts of seasickness, h e fo und service at sea a miserable experience. But ashore, his expertise in metallurgy, m athematics, ballistics, and gunnery wo uld make him invaluable to Lincoln and the U nited States N avy. Before reporting to the Washington Navy Yard in 1847 as a lieutenant, D ahlgren served in the US Coast Survey, where he received training in mathematics, precision instruments, and scientific theory. At the navy yard, Dahlgren soon launched the Navy's first sustained scientific research and development program , which developed and tested revolutionary cannon designs, enhanced quality-control techniques fo r the manufacture of ship ordnance and naval ammunition, and tested the ballistic ch aracteristics of sh ip armor. Dahlgren's scientific approach to ballistics resulted in the creation of a gunnery range to test-fire cannons, with shot and shells Hying down the Anacostia River. He also created ballistic test pits for scientifically testing the penetrating capabilities of large- and small-caliber weapons under an array of controlled conditions, fi ring the guns into a variety of different materials to gauge and improve their destructive capabilities . The advent of armored ships in the C ivil War raised questions as to the best m eans of both protection and offen sive

This Mathew Brady image of j ohn Dahlgren on board USS Pawnee, taken on 21 April 1865, is perhaps the most fam ous image of the Rear Admiral. Dahlgren is shown leaning against one of his 50-pound rifles. The devastated remains of Fort Sumter appear over his shoulder. In November 1863 Dahlgren wrote a friend, saying: "Perhaps you might like to see what's before my eyes-Sumter crumbling away before our cannon, which sound incessantly. " By the time this photograph was taken, the fort had largely been reduced to a pile of rubble. firepower. D ebates raged over how thick to m ake iro n plating to cover a vessel, wh ether to employ one thick plate or a combination of thin armor plates, whether to slope armor or not, how much powder to use to penetrate iron, whether a ro und projectile was better than a Bat-point pro-

jectile, and whether shells were better than shot. O pinions and debates raged until practical experimentation and experiences provided definitive answers. For the Union Navy, these questions were largely put to John D ahlgren ro resolve. A Near-death Experience Leads to Dahlgren's Soda-water Bottle Gun An accidental explosion of a 32-pound gun at h is experimental battery at the Washington Navy Yard on his 4 0th birthday in 1849 led to D ahlgren's greatest creationthe development of the U nion's most powerful and versatile heavy smoothbore cannon. The explosion at the test site killed the gunner and injured the gun crew and observe rs in close range, including D ahlgren, who was hi t by Hying pieces of the cannon. D etermined to reduce the h igh fa ilure rates

Washington Navy Yard, circa 1862, as seen from above the Anacostia River. 20