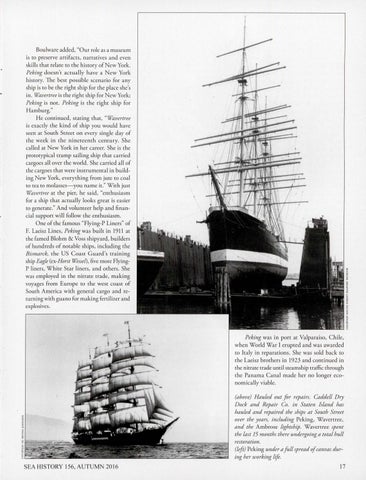 Boulware added, "Our role as a museum is to preserve artifacts, narratives and even skills that relate to the history of New York. Peking doesn't actually h ave a New York history. The best possible scenario for any ship is to be the right ship for the place she's in. Wavertree is the right ship for New York; Peking is not. Peking is the right ship for Hamburg." He continued, stating that, "Wavertree is exactly the kind of ship yo u would have seen at South Street on every single day of the week in the nineteenth century. She called at New York in her career. She is the prototypical tramp sailing ship that carried cargoes all over the wo rld. She carried all of the cargoes that were instrumental in building New York, everything from jute to coal to tea to molasses-you name it." With just Wavertree at the pier, he said, "enthusiasm for a ship that actually looks great is easier to generate." And volunteer help and financial support will follow the enthusiasm. One of the famous "Flying-P Liners" of F. Laeisz Lines, Peking was built in 1911 at the famed Blohm & Voss shipyard, builders of hundreds of notable ships, including the Bismarck, the US Coast G uard's training ship Eagle (ex-Horst Wessel), five more FlyingP liners, White Star liners, and others. She was employed in the nitrate trade, making voyages from Europe to the west coast of South America with general cargo and returning with guano for making fertilizer and explosives.

Peking was in port at Valparaiso, Chile, when World War I erupted and was awarded to Italy in reparations. She was sold back to the Laeisz brothers in 1923 and continued in the nitrate trade until steamship traffic through the Panama Canal made her no longer economically viable. (above) Hauled out for repairs. Caddell D ry Dock and Repair Co. in Staten Island has hauled and repaired the ships at South Street over the years, including Peking, Waverrree, and the Ambrose lightship. Wavertree spent the last 15 months there undergoing a total hull restoration. (left) Peking under a full spread ofcanvas during her working life.