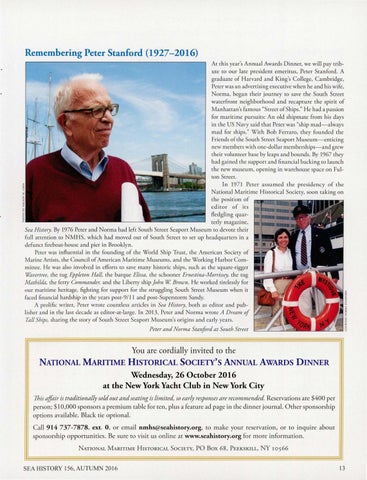 Remembering Peter Stanford (1927-2016) Ar this year&#39;s Annual Awards Dinner, we will pay tribute to our late president emeritus, Peter Stanford. A graduate of H arvard and King&#39;s College, Cambridge, Peter was an advertising executive when he and his wife, Norma, began their journey to save the South Street waterfront neighborhood and recapture the spirit of Manhattan&#39;s fa mous &quot;Street of Ships.&quot; H e had a passion for maritime pursuits: An old shipmate from his days in the US Navy said that Peter was &quot;ship mad-always mad for ships.&quot; With Bob Ferraro, they founded the Friends of the South Street Seaport Museum-enticing new members with one-dollar memberships-and grew their volunteer base by leaps and bounds. By 1967 they had gained the support and financial backing to launch the new museum, opening in warehouse space on Fulton Street. In 1971 Peter ass umed the presidency of the National Maritime Historical Society, soon raking on the position of edito r of it s fledgling quarterly magazine, Sea History. By 1976 Peter and Norma had left South Street Seaport M useum to devo te their fu ll attention to NMHS, which had moved our of South Street to set up headquarters in a defunct fireboat- house and pier in Brooklyn. Peter was influential in th e founding of the World Ship Trust, the American Society of Marine Artists, the Council of American Maritime Museums, and the Wo rking Harbor Committee. He was also involved in effo rts to save many historic ships, such as the square-rigger Wavertree, the rug Eppleton Hall the barque Elissa, the schooner Ernestina-Morrissey, the rug Mathilda, the ferry Commander, and the Liberty ship john W Brown. He worked tirelessly for our maritime heritage, fighting for support for the struggling So uth Street Museum when it faced financial hardship in the years posr-9/ 11 and posr-Superstorm Sandy. A prolific writer, Peter wrote countless articles in Sea History, both as editor and publisher and in the las t decade as editor-a t-large. In 201 3, Peter and Norma wro te A Dream of Taff Ships, sharing the story of Sourh Street Seaport Museum&#39;s origins and early yea rs.

You are cordially invited to the NATIONAL MARITIME HISTORICAL SOCIETY&#39;S ANNUAL AWARDS DINNER Wednesday, 26 October 2016 at the New York Yacht Club in New York City This affair is traditionally sold out and seating is limited, so early responses are recommended. Reservations are $400 per person; $10,000 spo nso rs a premium table for ten, plus a feature ad page in the dinner journal. Other sponsorship options available. Black tie optional. Call 914 737-787 8, ext. 0, or em ail nmh s@seahistory.org, to make your reservation, or to inquire about sponsorship opportunities. Be sure to visit us online at www.seahistory.org for more information. NATIONAL MARITIME HISTORICAL SocIETY, PO Box