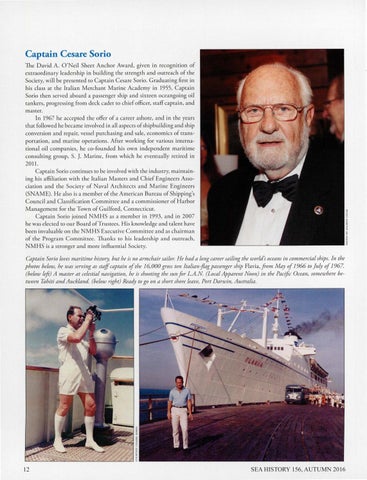 Captain Cesare Sorio The David A. O&#39;Neil Sheet Anchor Award, given in recognition of extraordinary leadership in building the strength and outreach of the Society, will be presented to Captain Cesare Sorio. Graduating first in his class at the Italian Merchant M arine Academy in 1955, Captain Sorio then served aboard a passenger ship and sixteen oceangoing oil tankers, progressing from deck cadet to chief officer, staff captain, and mas ter. In 1967 he accepted the offer of a career as hore, and in the years that followed he became involved in all aspects of shipbuilding and ship conversion and repair, vessel purchasing and sale, economics of transportation, and marine operations. After working for various international oil companies, he co-founded his own independent maritime consulting group, S. J. Marine, from which he eventually retired in 2011. Captain Sorio continues to be involved with the industry, maintaining his affi liation with the Italian Masters and C hief Engineers Association a nd the Society of Naval Architects and Marine E ngineers (SNAME). He also is a member of the American Bureau of Shipping&#39;s Council and C lassification Committee and a commissioner of H arbor Management for the Town of G uilford, Connecticut. Captai n Sorio joined NMHS as a member in 1993, and in 2007 he was elected to our Board ofTrustees. His knowledge and talent have been invaluable on the NMHS Executive Committee and as chairman of the Program Committee. Thanks to his leadership and outreach, NMHS is a stronger and more influential Society.

Captain Sorio loves maritime history, but he is no armchair sailor. He had a long career sailing the world&#39;s oceans in commercial ships. In the photos below, he was serving as staff captain of the 16, 000 gross ton Italian-flag passenger ship Flavia, ftom May of 1966 to July of 1967 (below left) A master at celestial navigation, he is shooting the sun for L.A.N (Local Apparent Noon) in the Pacific Ocean, somewhere between Tahiti and Auckland. (below right) Ready to go on a short shore leave, Port Darwin, Australia.