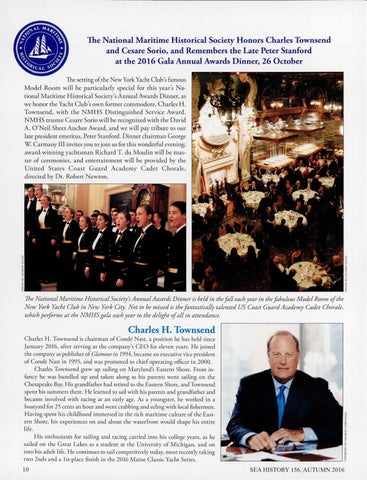 The National Maritime Historical Society Honors Charles Townsend and Cesare Sorio, and Remembers the Late Peter Stanford at the 2016 Gala Annual Awards Dinner, 26 October The setting of the New York Yacht Club&#39;s famous Model Room will be particularly special for this year&#39;s National Maritime Historical Society&#39;s Annual Awards Dinner, as we honor the Yacht Club &#39;s own former commodore, Charles H. Townsend, with the NMHS Distinguished Service Award. NMHS trustee Cesare Sorio will be recognized with the David A. O &#39;Neil Sheer Anchor Award, and we will pay tribute to our late president emeritus, Peter Stanford. Dinner chairman George W. Carmany III invites you to join us for this wonderful evening; award-winning yachtsman Richard T. du Moulin will be master of ceremonies, and entertainment will be provided by the United States Coast Guard Academy Cadet Chorale, directed by Dr. Robert Newton.

The National Maritime Historical Society&#39;s Annual Awards Dinner is held in the fall each year in the fabulous Model Room ofthe New York Yacht Club in New York City. Not to be missed is the fantastically talented US Coast Guard Academy Cadet Chorale, which performs at the NMHS gala each year to the delight ofall in attendance.

Charles H. Townsend Charles H. Townsend is chairman of Conde Nasr, a position he has held since January 2016, after serving as the company&#39;s CEO for eleven years. He joined the company as publisher of Glamour in 1994, became an executive vice president of Conde Nast in 1995, and was promoted to chief operating officer in 2000. Charles Townsend grew up sailing on Maryland&#39;s Eastern Shore. From infancy he was bundled up and taken along as his parents went sailing on the Chesapeake Bay. His grandfather had retired to the Eastern Shore, and Townsend spent his summers there. He learned to sail with his parents and grandfather and became involved with racing at an early age. As a youngster, he worked in a boatyard for 25 cents an hour and went crabbing and eeling with local fishermen. Having spent his childhood immersed in the rich maritime culture of the Eastern Shore, his experiences on and about the waterfront would shape his entire life. His enthusiasm for sai ling and racing carried into his college years, as he sailed on the Great Lakes as a student at the University of Michigan, and on into his adult life. He continues to sail competitively today, most recently taking two 2nds and a 1st-place finish in the 2016 Maine Classic Yacht Series.