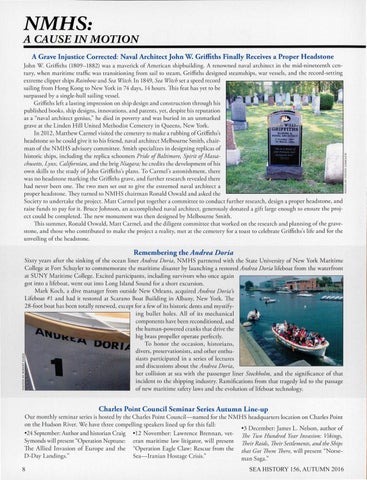 NMHS: A CAUSE IN MOTION A Grave Injustice Corrected: Naval Architect John W. Griffiths Finally Receives a Proper Headstone John W. G riffiths (1809-1882) was a maverick of American shipbuilding. A renowned n aval architect in the mid-nineteenth century, when maritime traffic was transitioning from sail to steam, Griffiths designed steamships, war vessels, and the record-settin g extreme clipper ships Rainbow and Sea Witch. In 1849, Sea Witch set a speed record sailing from Hong Kong to New York in 74 days, 14 hours. This feat has ye t to be surpassed by a single-hull sailing vessel. Griffiths lefr a lasting impression on ship design and construction through his published books, ship designs, innovations, and patents, ye t, despite his reputation as a &quot;naval architect genius,&quot; he died in poverty and was buried in an unmarked grave at the Linden Hill United Methodist Cemetery in Queens, New York. In 2012 , Matthew Carmel visited the cemetery to make a rubbing of Griffiths&#39;s headstone so he could give it to his friend, naval architect Melbourne Smith, chairman of the NMHS advisory committee. Smith specializes in designing replicas of historic ships, including the replica schooners Pride ofBaltimore, Spirit ofMassachusetts, Lynx, Californian, and the brig Niagara; he credits the development of his own skills to the study of]ohn Griffiths&#39;s plans. To Carmel&#39;s astonishment, there was no headsto ne marking the G riffiths grave, and further research revealed there had never been one. The two men set out to give the esteemed naval architect a proper headstone. They turned to N MHS chairman Ronald Oswald and asked the Society to undertake the project. Matt Carmel put together a committee to conduct further research, design a proper headstone, and raise funds to pay for it. Bruce Johnson, an accomplished naval architect, generously donated a gifr large enough to ensure the project could be completed . The new monument was then designed by Melbourne Smith. This summer, Ronald Oswald, Matt Carmel, and the diligent committee that worked on the research and planning of the gravestone, and those who contributed to make the project a reality, met at the cemetery for a toast to celebrate G riffiths&#39;s life and for the unveiling of the headstone.

Remembering the Andrea Doria Sixty years after the sinking of the ocean liner Andrea Doria, NMHS partnered with the State University of New York Maritime College at Fort Schuyler to commemorate the maritime disaster by launching a restored Andrea Doria lifeboat from the waterfront at SUNY Maritime College. Excited participants, including survivors who once again got into a lifeboat, went out into Long Island Sound for a short excursion. Mark Koch, a dive manager from outside New Orleans, acquired Andrea Doria&#39;s Lifeboat # 1 and had it restored at Scarano Boat Building in Albany, New York. The 28-foot boat has been totally renewed, except for a few of its historic dents and mystifying bullet holes. All of its mech a nical components have been reconditioned, and the human-powered cranks that drive the big brass propeller operate perfectl y. To honor the occasion, historians, divers, preservationists, and other enth usiasts participated in a series of lectures and discussions abo ut the Andrea Doria, her collision at sea with the passe nger liner Stockholm, and the significance of that incident to th e shipping industry. Ramifications from that tragedy led to the passage of new maritime safety laws and the evolution of lifeboat technology.