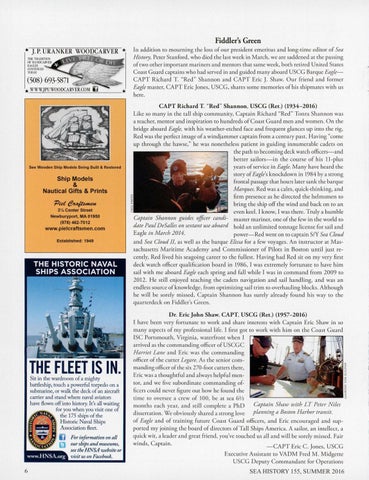 THE FLEET IS IN. Sit in the wardroom of a mighty battleship, touch a powerful torpedo on a submarine, or walk the deck of an aircraft carrier and stand where naval aviators have flown off into history. It&#39;s all waiting for you when you visit one of ~~&amp; the 175 ships of the Historic Naval Ships Association fleet.

For information on all our ships and museums, see the HNSA website or visit us on Facebook.

In addition to mourning the loss of our president emeritus and long-time editor of Sea History, Peter Stanford, who died the last week in March, we are saddened at the passing of two other important mariners and mentors that same week, both retired United States Coast Guard captains who had served in and guided many aboard USCG Barque EagleCAPT Richard T. &quot;Red&quot; Shannon and CAPT Eric ]. Shaw. Our friend and former Eagle master, CAPT Eric Jones, USCG, shares some memories of his shipmates with us here.

CAPT Richard T. &quot;Red&quot; Shannon, USCG (Ret.) (1934-2016) Like so many in the tall ship community, Captain Richard &quot;Red&quot; Tonra Shannon was a teacher, mentor and inspiration to hundreds of Coast Guard men and women. On the bridge aboard Eagle, with his weather-etched face and frequent glances up into the rig, Red was the perfect image of a windjammer captain from a century past. Having &quot;come up through the hawse,&quot; he was nonetheless patient in guiding innumerable cadets on the path to becoming deck watch officers-and better sailors-in the course of his 11-plus years of service in Eagle. Many have heard the story of Eagle&#39;s knockdown in 1984 by a strong frontal passage that hours later sank the barque Marques. Red was a calm, quick-thinking, and firm presence as he directed the helmsmen to bring the ship off the wind and back on to an even keel. I know, I was there. Truly a humble Captain Shannon guides officer candi- master mariner, one of the few in the world to date Paul DeSalles on sextant use aboard hold an unlimited tonnage license for sail and Eagle in March 2014. power-Red went on to captain S/Y Sea Cloud and Sea Cloud II, as well as the barque Elissa for a few voyages . An instructor at Massachusetts Maritime Academy and Commissioner of Pilots in Boston until just recently, Red lived his seagoing career to the fullest. Having had Red sit on my very first deck watch officer qualification board in 1986, I was extremely fortunate to have him sail with me aboard Eagle each spring and fall while I was in command from 2009 to 2012. He still enjoyed teaching the cadets navigation and sail handling, and was an endless source of knowledge, from optimizing sail trim to overhauling blocks. Although he will be sorely missed, Captain Shannon has surely already found his way to the quarterdeck on Fiddler&#39;s Green. Dr. Eric John Shaw, CAPT, USCG (Ret.) (1957-2016) I have been very fortunate to work and share interests with Captain Eric Shaw in so many aspects of my professional life. I first got to work with him on the Coast Guard ISC Portsmouth, Virginia, waterfront when I arrived as the commanding officer ofUSCGC Harriet Lane and Eric was the commanding officer of the cutter Legare. As the senior commanding officer of the six 270-foot cutters there, Eric was a thoughtful and always helpful mentor, and we five subordinate commanding officers could never figure out how he found the time to oversee a crew of 100, be at sea 6\/2 months each year, and still complete a PhD Captain Shaw with LT Peter Niles dissertation. We obviously shared a strong love planning a Boston Harbor transit. of Eagle and of training future Coast Guard officers, and Eric encouraged and supported my joining the board of directors of Tall Ships America. A sailor, an intellect, a quick wit, a leader and great friend, you&#39;ve touched us all and will be sorely missed. Fair winds, Captain. -CAPT Eric C. Jones, USCG Executive Assistant to VADM Fred M. Midgette USCG Deputy Commandant for Operations SEA HISTORY 155, SUMMER 2016