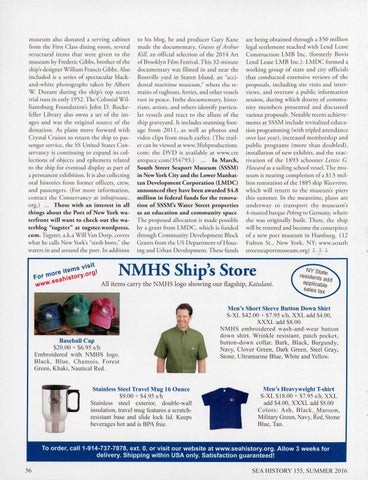 museum also donated a serving cabinet from the First C lass dining room, several stru cmral items that were given to the museum by Frederic Gibbs, brother of the ship&#39;s designer William Francis Gibbs. Also included is a series of spectacular blackand-w hite photographs raken by Albert W Durant during the ship&#39;s top secret trial runs in earl y 1952. The Colonial Williamsburg Foundation&#39;s John D. Rockefe ll er Library also owns a set of the images and was the original source of the donation. As plans move forward with C rys tal C ruises to return the ship to passenger se rvice, the SS United States Conservancy is co ntinuing to expand its collectio ns of objects and ephemera related to the ship for evenmal display as part of a permanent exhib ition. It is also coll ecting oral histories from former officers, crew, and passe ngers. (For more information, contact the Conservancy at info@ss usc. org.) . . . Those with an interest in all things about the Port of New York waterfront will want to check out the waterblog &quot;tugster&quot; at tugster.wordpress. com. Tugster, a.k.a Will Van Dorp, covers what he ca lls New York&#39;s &quot;sixth born,&quot; the waters in an d aro und the port. In add iti on

to his blog, he and producer Gary Kane made the documentary, Graves of Arthur Kill, an official selection of the 20 14 Art of Brooklyn Film Festival. T his 32-minute documentary was filmed in and near the Rossville yard in Staten Island, an &quot;accidental maritime museum,&quot; where the remains of mgboats, ferries, and other vessels rust in peace. Inthe do cumentary, historians, artists, and othe rs id entify particular vessels and react to the allure of the ship graveyard. It includes smnning footage from 2011, as well as photos and video clips from much earli er. (The trailer can be viewed at www.3fishproductions. com; the DVD is avail able at www.cre In March, atespace.co m/354793.) South Street Seaport Museum (SSSM) in New York City and the Lower Manhattan Development Corporation (LMDC) announced they have been awarded $4.8 million in federal funds for the renovation of SSSM&#39;s Water Street properties as an education and community space. T he proposed all ocation is made possible by a grant from LMDC, which is funded through Co mmuni ty Development Block Grants from the US Department of Housing and Urban Development. These funds

are being obtai ned through a $5 0 million legal settl eme nt reached with Lend Lease Construction LMB Inc. (fo rmerly Bovis Lend Lease LMB Inc.). LMDC formed a working group of state and city officials that condu cted extensive reviews of the proposals , including site visits an d interviews, and oversaw a public in formation sessio n, during which dozens of co mmunity m embers presented and discussed various proposals. Notable recent ach ievements at SSSM include revitalized education programming (with tripled attend ance over last yea r), increased membership and public programs (more than doubled ), installation of new exhibits, and the reactivatio n of the 1893 schooner Lettie G. Howard as a sailin g school vessel. The museum is nearing completion of a $ 13 million resto ration of the 1885 ship Wavertree, which will remrn to the museum&#39;s pi ers thi s sum mer. In the meantime, plans are underway to transport the museum&#39;s 4-masted barq ue Peking to Germany, wh ere she was originally built. There, the ship will be resto red and become the centerpi ece of a new port museum in H amburg . (12 Fulton St., New York, NY; www.so u th streetseaportmuseum. o rg) .t t .t