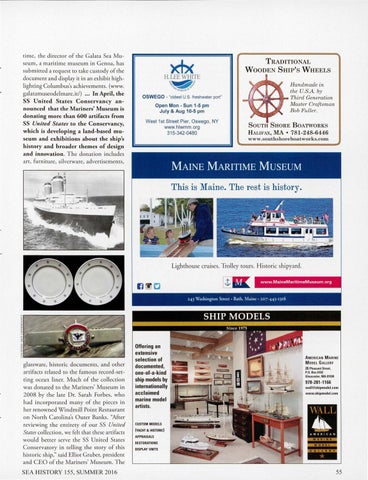 time, th e director of the Galata Sea Museum, a maritime museum in Genoa, has submi tted a request to take custody of the document and display it in an exhibit highlighting Columbus&#39;s achievements . (www. galatamuseodelmare.it/) ... In April, the SS United States Conservancy announced that the Mariners&#39; Museum is donating more than 600 artifacts from SS United States to the Conservancy, which is developing a land-based museum and exhibitions about the ship&#39;s history and broader themes of design and innovation. T he donation includes art, furniture, silverware, advertisements,

MAINE MARITIME MUSEUM This is Maine. The rest is history.

glassware, historic documents, and other artifacts related to the famous record-setting ocean liner. Much of the collectio n was donated to the M ariners&#39; Museum in 200 8 by the late Dr. Sarah Fo rbes, who had incorporated many of the pieces in her renowned W indmill Point Res taurant on No rth Carolina&#39;s Outer Banks. &quot;After reviewing the entirety of our SS United States collection, we fel t that these arti fac ts would better serve the SS Uni ted States Conservatory in telling the sto ry of this historic ship,&quot; said Elliot Gruber, president and CEO of the Mariners&#39; Museum. T he SEA HISTORY 155, SUMM ER 201 6