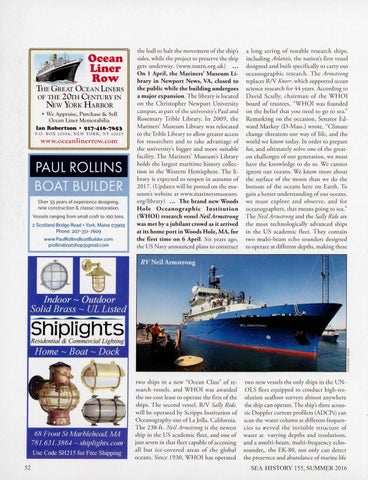 THE GREAT OCEAN LINERS OF THE

the hull to halt the movement of the ship&#39;s sides, while the project to preserve the ship gets underway. (www. nmrn.org. uk) On 1 April, the Mariners&#39; Museum Library in Newport News, VA, closed to the public while the building undergoes a major expansion. The library is located on the C hristopher Newport University campus, as part of the uni versity&#39;s Paul and Rosemary Trible Library. In 2009 , the Mariners&#39; Museum Library was relocated to the Trible Library to allow greater access for researchers and to take advantage of the universiry&#39;s bigger and more suitable faciliry. The Mariners&#39; Museum&#39;s Library holds the largest maritime history collection in the Western Hemisphere. The library is expected to reopen in autumn of 2017. (Updates will be posted o n the museum&#39;s website at www.marinersmuseum. org/library) ... The brand new Woods Hole Oceanographic Institution (WHOI) research vessel Neil Armstrong was met by a jubilant crowd as it arrived at its home port in Woods Hole, MA, for the first time on 6 April. Six years ago, the US Navy announced plans to construct

a long string of notabl e research ships, including Atlantis, the nation&#39;s first vessel designed a nd built specifically to carry out oceanographic research . The Armstrong replaces RIV Knorr, whi ch supported ocean science research fo r 44 years . According to David Scully, ch airman of the WHOI board of trustees, &quot;WHOI was founded on the belief that you need to go to sea.&quot; Remarking on the occas ion , Senator Edward Markey (D-Mass .) wrote, &quot;Climate change threatens our way of life, and the world we know today. In order to prepare for, and ultimately solve one of the greatest challenges of our generation, we must have the knowledge to do so. We cannot ignore our oceans. We know more about the surface of the moon than we do the bottom of the oceans here on Earth. To gain a better understanding of our oceans, we must explore and observe, and for oceanographers, that means going to sea.&quot; The Neil Armstrong and the Sally Ride are the most technologically advanced ships in the U S academic fleet. They contain two multi-beam echo sounders designed to operate at different depths, making these

rwo ships in a new &quot;Ocean C lass&quot; of research vessels, and WHOI was awarded the no-cost lease to operate the first of the ships. The second vessel , RIV Sally Ride, will be operated by Scripps Institution of Oceanography out of La Jolla, California. T he 238-fr. Neil A rmstrong is the newes t ship in the US academic fleet, and one of just seven in that fleet capable of accessing all but ice-covered a reas of the global oceans. Since 1930, WHOI has operated

rwo new vessels the only ships in th e UNO LS fleet equipped to conduct high-resolution seafloor surveys almost anywhere the ship can operate. The ship&#39;s three acousti c Doppler current profilers (ADCPs) can scan the &#39;Water column at different frequencies to rreveal the invisible structure of wa ter at varying depth s and resolutions, an d a mtulti-beam, multi-frequency echosounder,. the EK-80, not on ly can detect the presen ce and abundance of marine life