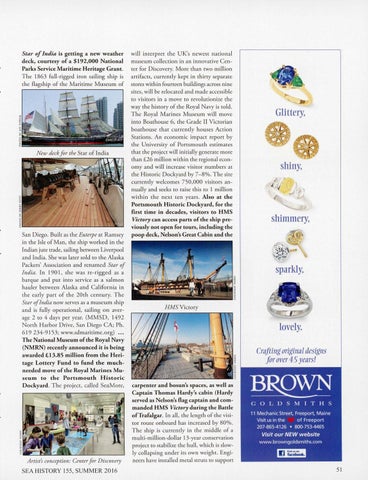 San D iego. Built as the Euterpe at Ramsey in the Isle of Man, the shi p worked in the Indian jute trade, sailing between Liverpool and Ind ia. She was later sold to th e Alaska Packers&#39; Association and renamed Star of India. In 1901 , sh e was re-rigged as a barque and put into service as a salmon hauler between Alaska and Califo rnia in the early part of the 20th century. T h e Star ofIndia now serves as a m useum ship and is fully operational, sailing on average 2 to 4 days per year. (MMSD, 1492 North Harbor Drive, San D iego CA; Ph. 6 19 234-9 153; www.sdma ri time.org) ... T he National Museum of the Royal Navy (NMRN) recently announced it is being awarded £13.85 million from the Herit age Lottery Fund to fund the muchneeded move of the Royal Marines Museum to the Portsmouth Historic Dockyard . T h e project, called SeaMo re,

will interpret the UK&#39;s newest national m useum collection in an inn ovative Center for D iscovery. More than two million artifacts, currently kept in th irty separate stores within fo urteen buildings across nine sites, will be relocated and made accessi ble to visitors in a move to revolutionize the way the history of the Royal Navy is told . The Royal Marines M useum will m ove into Boathouse 6, the Grade II Victorian boath ouse that currently houses Action Stations. An economic impact report by the University of Portsmo uth estim ates that the project will initially generate more than £26 million within the regional econom y and will increase visitor numbers at the H istoric D ockyard by 7-8%. T h e site currently welcomes 75 0,000 visitors ann ually and seeks to raise this to 1 million w ithin the n ext te n years. Also at the Portsmouth Historic Dockyard, for the first time in decades, visitors to HMS Victory can access parts of the ship previously not open for tours, including the poop deck, Nelson&#39;s Great Cabin and the

lovely. Crafting original designs for over 45 years! carpenter and bosun&#39;s spaces, as well as Captain Thomas Hardy&#39;s cabin (Hardy served as Nelson&#39;s flag captain and commanded HMS Victory during the Battle ofTrafalgar. In all, the length of the visito r route onboard has increased by 80%. T h e ship is currently in the mi ddle of a multi-million-dollar 13-year conservation project to stabilize the hull, which is slowly collapsing under its own weigh t. Engineers have installed metal struts to support