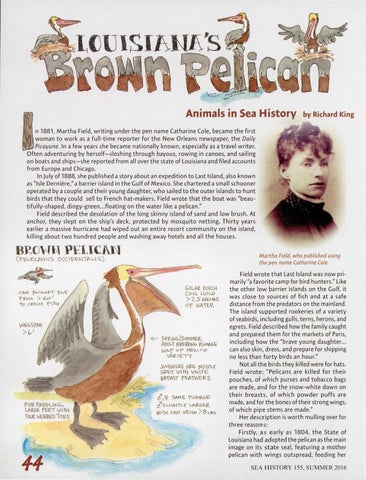 n 1881 , Martha Field, writin g under the pen name Catharine Cole, became the first woman to work as a full -time reporter for the New Orleans newspaper, the Daily Pica yun e. In a few years she became nationally known, especially as a travel writer. Often adventuring by herself-sloshing through bayous, rowing in canoes, and sailing on boats and ships-she reported from all over the state of Louisiana and filed accounts from Europe and Chicago. In July of 1888, she published a story about an expedition to Last Island, also known as &quot;Isle Derniere,&quot; a barrier island in the Gu lf of Me xi co. She chartered a small schooner operated by a couple and their young daughter, who sailed to the outer islands to hunt birds that they could sell to French hat-makers . Field wrote that the boat was &quot;beautifully-shaped, dingy-green ...floating on the water like a pelican .&quot; Field described the desolation of the long skinny island of sand and low brush . At anchor, they slept on the ship&#39;s deck, protected by mosquito netting. Thirty years earlier a massive hurricane had wiped out an entire resort community on the island, killing about two hundred people and washing away hotels and all the houses .

Field wrote that Last Island was now primarily &quot;a favorite camp for bird hunters.&quot; Like the other low barrier islands on the Gulf, it was close to sources of fish and at a safe distance from the predators on the mainland. The island supported rookeries of a variety of seabirds, including gulls, terns, herons, and egrets. Field described how the family caught and prepared them for the markets of Paris, including how the &quot;brave young daughter... can also skin , dress, and prepare for shipping no less than forty birds an hour.&quot; Not all the birds they killed were for hats. Field wrote: &quot;Pelicans are killed for their pouches, of which purses and tobacco bags are made, and for the snow-white down on their breasts, of which powder puffs are made, and for the bones of their strong wings, of which pipe stems are made.&quot; Her desc ription is worth mulling over for three reasons: Firstly, a1s early as 1804, the State of Louisiana had adopted the pelican as the main image on its state seal, featuring a mother pelican with wings outspread, feeding her SEA HISTORY l 55, SUMMER 201 6