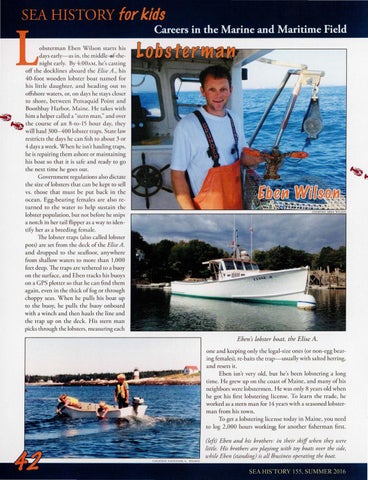 obsterman Eben W ilso n starts his days ea rly-as in, the middle-sf-the~~:::;.r night early. By 4: 00AM, he&#39;s cas ting off the docklines aboard the Elise A., his 4 0-foo t wooden lobster boat named fo r his little d augh ter, and h eadin g out to offshore waters, or, on days he stays closer to shore, between Pemaquid Point and Boothbay Harbor, Maine. He takes with h im a helper called a &quot;stern man,&quot; and over , . the course of an 8-to-15 hour day, they will haul 300-400 lobster traps. State law restricts the days he can fi sh to about 3 or 4 days a week. W hen he isn&#39;t hauling traps, he is repairing them ashore or maintaining his boat so that it is safe and ready to go the nex t time he goes out. Government regulations also dictate the size oflobsters that ca n be kept to sell vs. those that must be put back in the ocean . Egg-beari ng fe males are also returned to the wa ter to help susta in the lobster population, but not before he snips a notch in her tail flipper as a way to identify her as a breeding fem ale. The lobster traps (also called lobster pots) are set from the deck of the Elise A . and d ro pped to the seafloor, anywhere fro m shallow waters to mo re than 1,000 feet deep. The traps are te thered to a buoy on the surface , and Eben tracks his buoys on a GPS plotter so that he can fi nd them again, even in the thick of fog or th rough choppy seas. When he pulls his boat up to the buoy, he pulls the buoy onboard with a winch and then hauls the line and the trap up on the deck. His stern man picks th rough the lobsters, measuring each

Eben &#39;s lobster boa t, the Elise A. one and keeping only the lega l-size ones (or non-egg bearing females), re-baits the trap- usually with salted herring, and resets it. Eben isn&#39;t very old , but he&#39;s been lobstering a long time. He grew up on the coast of M aine, and many of his neighbors were lobstermen. H e was only 8 years old when he got his first lobstering li cense. To lea rn the trade, he worked as a stern man for 14 years with a seasoned lobsterman from hi s tow n. To get a lobstering lice nse today in M aine, you need to log 2,000 hours wo rkin{g fo r another fisherman first.

(left) Eben and his brothers ; in their skiff when they were little. H is brothers are p layimg with toy boats over the side, while Eben (standing) is all l:husiness operating the boat.