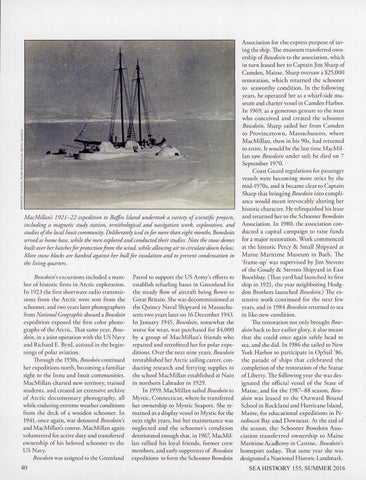 Association for the express purpose of saving the ship. The museum transferred ownership of Bowdoin to the association, which in turn leased her to Captain Jim Sharp of Camden, Maine. Sharp oversaw a $25,000 restoration, which returned the schooner to seaworrhy condition. In the following years, he operated her as a wharf-side museum and charter vessel in Camden H arbor. In 1969, as a generous gesture to the m an who conceived and created the schooner Bowdoin, Sharp sailed her from Camden to Provincetown, Massachusetts, where M acMillan, then in his 90s, h ad returned to retire. Ir would be the last time M acMillan saw Bowdoin under sail; he died on 7 September 1970. Coast Guard regulations for passenger vessels were becoming more strict by the mid-1970s, and it became clear to Captain Sharp that bringing Bowdoin into compliance wo uld m ean irrevocably altering her historic character. He relinquished his lease and returned her to the Schooner Bowdoin MacMillan&#39;s 1921-22 expedition to Baffin Island undertook a variety ofscientific projects, including a magnetic study station, ornithological and navigation work, exploration, and Association. In 1980, the association constudies ofthe Local Inuit community. D eliberately iced in for more than eight months, Bowdoin ducted a capital campaign to raise funds served as home base, while the men explored and conducted their studies. Note the snow domes for a major restoration. Work commenced at the historic Percy &amp; Small Shipyard at built over her hatches for protection from the wind, while allowing air to circulate down below. More snow blocks are banked against her huff for insulation and to prevent condensation in Maine Maritime Museum in Bath. The &#39;frame-up&#39; was supervised by Jim Stevens the Living quarters. of the Go udy &amp; Stevens Shipyard in East Bowdoin&#39;s excursions included a num- Patrol to support the US Army&#39;s efforts to Boothbay. (Th ar ya rd had launched its first ber of historic firsts in Arctic exploration. es tablish refueling bases in Greenland fo r ship in 1921 , rhe yea r neighboring HodgIn 1923 the first shortwave radio transmis- the steady flow of aircraft being flown to don Brothers launched Bowdoin.) The exsions from the Arctic were sent from the G reat Britain. She was decommissioned at tensive work continued for the next few schooner, and two years later photographers the Quincy Naval Shipyard in Massachu- years, and in 1984 Bowdoin returned to sea from National Geographic aboard a Bowdoin setts two yea rs later on 16 December 1943. in like-new condition. expedition exposed the first color photo- In January 1945, Bowdoin, somewhat the The restoration not only brought Bowgraphs of the Arctic. Thar same year, Bow- worse for wear, was purchased for $4,000 doin back to her earlier glory, it also meant doin, in a joint operation with the US Navy by a gro up of MacMillan&#39;s friends who that she could once again safely head to and Richard E. Byrd, assisted in the begin- repaired and retrofitted her for polar expe- sea, and she did. In 1986 she sailed to New nings of polar aviation. d itio ns. Over the next nine years, Bowdoin York Harbor to participate in OpSail &#39;86, Through the 1930s, Bowdoin continued reestablished her Arctic sailing career, con- the parade of ships that celebrated the her expeditions north, becoming a familiar ducting research and ferrying supplies to completion of the restoration of the Statue sight to the Innu and Inuit communities. the school MacMillan established at Nain of Liberty. The following year she was designated the official vessel of the State of MacMillan charted new territory, trained in northern Labrador in 1929. students, and created an extensive archive In 1959, MacMillan sailed Bowdoin to Maine, and for the 1987-88 season, Bowof Arctic documentary photography, all Mystic, Connecticut, where he transferred doin was leased to the Outward Bound while enduring extreme weather conditions her ownership to Mystic Seaport. She re- School in Rockland and Hurricane Island, from the deck of a wooden schooner. In mained as a display vessel in Mystic for the Maine, for educational expeditions in Pe1941, once again, war detoured Bowdoin&#39;s next eight years, bur her maintenance was nobscot Bay arud Downeast. At the end of and MacMillan&#39;s course. MacMillan again neglected and the schooner&#39;s condition the season, the: Schooner Bowdoin Assovolunteered for active duty and transferred deteriorated enough that, in 1967, MacMil- ciation transfe:rred ownership to Maine ownership of his beloved schooner to the lan rallied his loyal friends, former crew MaririmeAcadlemy in Castine, Bowdoin&#39;s US Navy. members, and early supporters of Bowdoin homeporr toda1y. Thar same yea r she was Bowdoin was assigned ro the Greenland expeditions to form the Schooner Bowdoin designated a Naitional Historic Landmark. 40