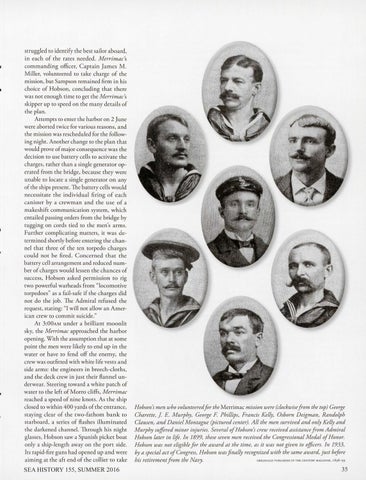 struggled to identify the best sailor aboard, in each of the rates needed. Merrimac &#39;s commanding officer, Captain James M. Miller, volunteered to take charge of the mission, but Sampson remained firm in his choice of Hobson, concluding that there was not enough time to get the Merrimac&#39;s skipper up to speed on the many derails of the plan. Attempts to enter the harbor on 2 June were aborted twice for various reasons, and the mission was rescheduled for the following night. Another change to the plan that would prove of major consequence was the decision to use battery cells to activate rhe charges, rather than a single generator operated from the bridge, because they were unable to locate a single generator on any of the ships present. The battery cells would necessitate the individual firing of each canister by a crewman and the use of a makeshift communication system, which emailed passing orders from the bridge by rugging on cords tied to the men&#39;s arms. Further complicating matters, it was determined shortly before entering the channel that three of the ten torpedo charges could not be fired . Concerned that the battery cell arrangement and reduced number of charges would lessen the chances of success, Hobson asked permission to rig two powerful warheads from &quot;locomotive torpedoes&quot; as a fail-safe if the charges did not do the job. The Admiral refused the request, stating: &quot;I will not allow an American crew to commit suicide.&quot; At 3:00AM under a brilliant moonlit sky, the M errimac approached the harbor opening. With the assumption that at some point the men were likely to end up in the water or have to fend off the enemy, the crew was outfitted with white life vests and side arms: the engineers in breech-cloths, and the deck crew in just their flannel underwear. Steering toward a white parch of water to the left of Morro cliffs, Merrimac reached a speed of nine knots. As the ship closed to within 400 yards of the entrance, staying clear of the two-fathom bank to starboard, a series of flashes illuminated the darkened channel. Through his night glasses, Hobson saw a Spanish picket boat only a ship-length away on the port side. Its rapid-fire guns had opened up and were aiming at the aft end of the collier to take

Hobson&#39;s men who volunteered for the Merrimac mission were (clockwise f rom the top) George Charette, J E. Mu rphy, George F Phillips, Francis Kelly, Osborn Deigman, Randolph Clausen, and Daniel Montague (pictured center). All the men survived and only Kelly and Murphy suffered minor injuries. Several ofRobson&#39;s crew received assistance from Admiral Hobson later in life. In 1899, these seven men received the Congressional Medal of Honor. Hobson was not eligible for the award at the time, as it was not given to officers. In 1933, by a special act of Congress, Hobson was finally recognized with the same award, just before his retirement from the Navy. o R1 G lN ALLY r usu s1-1Eo 1N T H E CENTURY MAGAZI NE, 1898-99