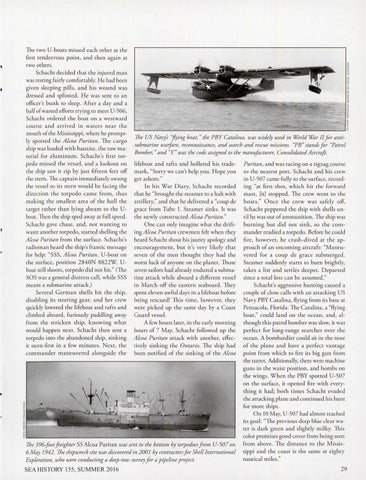 The two U-boats missed each other at the first rendezvous point, and then again at two others. Schacht decided that the injured man was resting fa irly comfortably. H e had been given sleeping pills, and his wo und was dressed and splinted . H e was sent to an officer&#39;s bunk to sleep. After a day and a half of was ted efforts trying to meet U-506, Schacht ordered the boat on a westwa rd co urse and a rri ved in waters near the mouth of the Mississippi, where he promptly spotted the A lcoa Puritan. The cargo ship was loaded with bauxite, the raw material fo r aluminum . Schacht&#39;s first to rpedo mi ssed the vessel, and a lookout on the ship saw it zip by just fifteen fee t off the stern . The captain immediately swung the vessel so its stern would be fac ing the di rectio n the torpedo came fro m , thu s making the smallest area of the hull the targe t rather than lying abeam to the Uboat. Then the ship sped away at full speed. Schacht gave chase, and, not wa nting to was te another torpedo, started shelling the A lcoa Puritan from the surface. Schacht&#39;s radioman heard the ship&#39;s fr antic message fo r help: &quot;SSS, Alcoa Puritan. U-boat on the surface, position 2840N 8822W. Uboat still shoots, torpedo did not hit.&quot; (The SOS was a general distress ca ll, while SSS meant a submarine attack.) Several German sh ells hit the ship, disabling its steering gea r, and her crew quickly lowered the lifeboat and rafts and climbed aboard, furio usly paddling away from the stricken ship, knowing what would happen next. Schacht then sent a torpedo into the abandoned ship, sinking it stern-first in a few minutes. N ext, the commander m a neuvered alongside the

The US Navy&#39;s &quot;flying boat,&quot; the PBY Catalina, was widely used in Wo rld lliir II for antisubmarine warfare, reconnaissance, and search and rescue missions. &quot;PB&quot; stands for &quot;Patrol Bomber, &quot;and &quot;Y&quot; was the code assigned to the manufacturer, Consolidated A ircraft.

lifeboat and rafts and hollered his trademark, &quot;Sorry we ca n&#39;t help yo u. H ope you get ashore.&quot; In his Wa r Diary, Schacht recorded that he &quot;brought the steamer to a hair with artillery,&quot; and th at he delive red a &quot;coup de grace from Tube l. Steamer sinks. It was the newly constructed A lcoa Puritan.&quot; One ca n only imagine what the drifting Alcoa Puritan crewmen felt when they heard Schacht shout his jau nty apology and encouragement, but it&#39;s very likely that seven of the men thought they had the worst luck of anyone on the planet. Those seven sailors had already endured a submarine attack while aboa rd a different vessel in M arch off the eas tern seaboard. They spent eleven awful days in a lifeboat before bein g rescued! This time, however, they were picked up the sa me day by a Coast Guard vessel. A few hours later, in the early morning hours of 7 M ay, Schacht followed up the A lcoa Puritan attack with ano ther, effectively sinking the O ntario. The ship h ad been notified of the sinking of the Alcoa

The 396-joot freighter SS Alcoa Puritan was sent to the bottom by torpedoes from U-507 on 6 May 1942. The shipwreck site was discovered in 2 001 by contractors for Shell International Exp loration, who were conducting a deep -tow survey for a pip eline proj ect.

Puritan, and was racing on a zigzag course to the nearest port. Schacht and his crew in U-5 07 ca me fully to the surface, recording &quot;at first shot, wh ich hit the fo rward mas t, [it] stopped. The crew went to the boa ts.&quot; Once the crew was safel y off, Schacht peppered the ship with shells until he was out of ammunition . The ship was burning but did not sink, so the commander readied a torpedo. Before he could fire, howeve r, he cras h-dived at the ap proach of an oncoming aircraft: &quot;M aneuvered fo r a coup d e grace submerged . Steamer suddenly starts to burn brightly, takes a list and se ttles deeper. D eparted since a total loss ca n be ass umed .&quot; Schacht&#39;s agg ressive hunting caused a couple of close calls with an attacking US N avy PBY Catalin a, fl ying from its base at Pensacola, Florida. The Catalina, a &quot;flying boat,&quot; could land on the ocean, and, although this patrol bomber was slow, it was p erfect for long-range searches over the ocean. A bombardier could sit in the nose of the plane and h ave a perfect vantage point fro m which to fire its big gun from the turret. Additionally, there were machine guns in the wa ist position, and bombs on the wings. When the PBY spotted U-507 on the surface, it opened fire with everything it had; both times Schacht evaded the attacking pl ane and continued his hu nt for more ships. On 10 May, U-5 07 had almost reached its goal: &quot;The previous deep blue clear water is dark green and slightly milky. This color p romises good cover from being seen fro m above. The d istance to the Mississippi and the coast is the same at eighty naurical miles.&quot;