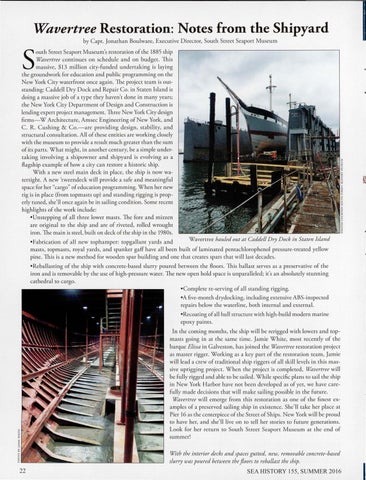 outh Street Seaport Museum&#39;s restoration of the 1885 ship Wavertree continues on schedule and on budget. This massive, $13 million city-funded undertaking is laying the groundwork for education and public programming on the New York City waterfront once again. The project team is outstanding: Caddell Dry Dock and Repair Co. in Staten Island is doing a massive job of a type they haven&#39;t done in many years; the New York City Department of Design and Construction is lending expert project management. Three New York City design firms-W Architecture, Amsec Engineering of New York, and C. R. Cushing &amp; Co.-are providing design, stability, and structural consultation. All of these entities are working closely with the museum to provide a result much greater than the sum of its parts. What might, in another century, be a simple undertaking involving a shipowner and shipyard is evolving as a Aagship example of how a city can restore a historic ship. With a new steel main deck in place, the ship is now watertight. A new &#39;tweendeck will provide a safe and meaningful space for her &quot;cargo&quot; of education ptogramming. When her new rig is in place (from topmasts up) and standing rigging is properly tuned, she&#39;ll once again be in sailing condition. Some recent highlights of the work include: •Unstepping of all three lower masts. The fore and mizzen are original to the ship and are of riveted, rolled wrought iron. The main is steel, built on deck of the ship in the 1980s. •Fabrication of all new tophamper: topgallant yards and

Wavertree hauled out at Caddell Dry Dock in Staten Island

masts, topmasts, royal yards, and spanker gaff have all been built of laminated pentachlotophenol pressure-treated yellow pine. This is a new method for wooden spar building and one that creates spars that will last decades. •Reba llasting of the ship with concrete-based slurry poured between the floors. This ballast serves as a preservative of the iron and is removable by the use of high-pressure water. The new open hold space is unparalleled; it&#39;s an absolutely stunning cathedral to cargo. • Complete re-serving of all standing rigging. •A five-month drydocking, including extensive ABS-inspected repairs below the waterline, both internal and external. • Recoating of all hull structure with high-build modern marine epoxy paints. In the coming months, the ship will be rerigged with lowers and topmasts going in at the same time. Jamie White, most recently of the barque Elissa in Galveston, has joined the Wavertree restoration project as master rigger. Working as a key part of the restoration team, Jamie will lead a crew of traditional ship riggers of all skill levels in this massive uprigging project. When the project is completed, Wavertree will be fully rigged and able to be sailed. While specific plans to sail the ship in New York Harbor have not been developed as of yet, we have carefully made decisions that will make sailing possible in the future. Wavertree will emerge from this restoration as one of the finest examples of a preserved sailing ship in existence. She&#39;ll take her place at Pier 16 as the centerpiece of the Street of Ships. New York will be proud to have her, and she&#39;ll live on to tell her stories to future generations. Look for her return to South Street Seaport Museum at the end of summer! With the interior decks and spaces gutted, new, removable concrete-based slurry was poured between the floors to reballast the ship.