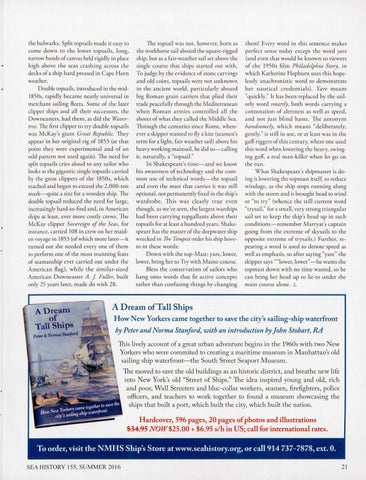 rhe bulwarks. Splir ropsails m ade ir easy ro co me down ro rhe lower ropsails, lo ng, narrow bands of canvas held rigid ly in place high above the seas crashing across rhe decks of a ship hard pressed in Cape H orn wear her. Double ropsails, imroduced in the mid1850s, rapidly became nearly universal in merchant sa iling fleets. Some of rhe larer clipper ships and all their successors, rhe Downeasters, had them, as did rhe Wavertree. The first clipper ro rry double ropsails was McKay's giant Great Republic. They appear in her original rig of 1853 (ar rhar point they were experimental and of an odd pane rn nor used again). The need for splir ropsails cries aloud ro any sailor who looks at rhe gigantic single ropsails carried by rhe grear clippers of the 1850s, which reached and began ro exceed rhe 2,000-ron mark-quire a size for a wooden ship. The double ropsail reduced the need for large, increasingly hard-ro-find and, in A merican ships ar leasr, ever more costly crews. The McKay clipper Sovereign of the Seas, for in sra nce, carried 108 in crew on her maiden voyage in 1853 (of which more larer-ir turned our she needed every one of them ro perform one of the mosr stunning fears of seamanship ever carried our under the A merica n flag) , while the similar-sized American Downeasrer A. ]. Fuller, builr only 25 years larer, made do wirh 28.

A Dream of Tall Ships

The ropsail was nor, however, born as the workhorse sail aboard rhe square-rigged ship, bur as a fair-weather sail set above the si ngle course rhar ships starred our wirh. To judge by the evidence of srone carvings and old coins, ropsails were not unknown in rhe ancient world, parricularly aboard big Roman grain carriers that plied their uade peacefully through rhe Medi terra nean when Roman armies controlled all rhe shores of what they ca lled the Middle Sea. Through the centuries since Rome, whenever a skipper wanted ro fly a kire (seamen's term for a lighr, fa ir weather sail) above his heavy working mainsail, he did so-calling ir, narurally, a "ropsail." In Shakespeare's rime-and we know his awareness of technology and rhe common use of rechnical words-the ropsai l and even the masr that carries ir was srill oprional, not permanently fi xed in the ship's wa rdrobe. This was clearly true even rho ugh, as we've seen, rhe larges t warships had been carrying ropgallants above their ropsails for at least a hundred years. Shakespea re has the master of rhe deepwarer ship wrecked in 1he Tempest order his ship hovero in these words: Down with the rop-Masr: yare, lower, lower, bring her ro Try with Maine-course. Bless the conservatism of sailors who hang onto words that fir active concepts rather than confusing things by changing

them! Every word in this sentence m akes perfect sense roday except rhe word yare (and even rhar wo uld be known ro viewers of rhe 195 0s film Philadelphia Story, in which Katherine Hepburn uses this hopelessly anachron istic word ro demonstrate her n aurical credenti als). Yare m ea nt "quickly." Ir has been replaced by the sailorly word smartly, both words carrying a connotation of aler rness as well as speed, and not just blind haste. The antonym handsomely, which mean s "deliberately, gently," is still in use, or at least was in the gaff-riggers of rhis century, where one used this word when lowering the heavy, swinging gaff, a real man-killer when let go on the run. W hat Shakespeare's shipmasrer is doing is loweri ng the ropmast itself, ro reduce wi ndage, as rhe ship srops running along with rhe srorm and is brought head ro wind or "ro try" (whence the still current word "uysail," for a small, very strong triangul ar sail set ro keep the ship's head up in such conditions-remember Marryar's captain goi ng from the extreme of skysails ro the opposire exrreme of rrysai ls.) Further, repeating a word is used to denore speed as well as emphasis, so after saying "yare" the skipper says "" lower, lower"-he wants rhe ropmasr down with no time wasted, so he ca n bring her head up ro lie-ro under the main course alone . .t

A Dream of Tall Ships How New Yorkers came together to save the city's sailing-ship waterfront by Peter and Norma Stanford, with an introduction by john Stobart, RA This lively account of a great urban adventure begins in the 1960s with two New Yorkers who were commited to creating a maritime museum in Manhattan's old sailing ship waterfront-the South Street Seaport Museum. The moved to save the old buildings as an historic district, and breathe new life into New York's old "Street of Ships." The idea inspired young and old, rich and poor, Wall Streeters and blue-collar workers, seamen, firefighters, police officers, and teachers to work together to found a museum showcasing the ships that built a port, which built the city, which built the nation.