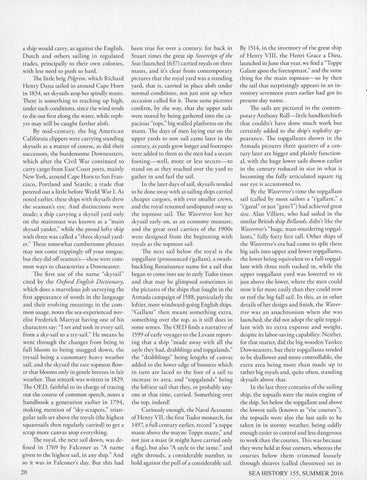 a ship would carry, as against the English, Dutch and others sailing in regulated trades, principally to their own colonies, with less need to push so hard . The little brig Pilgrim , which Richard H enry Dana sailed in around Cape Horn in 1834, set skysails atop her spindly masts. There is something to reaching up high, under such conditions, since the wind tends to die out first along the water, while zephyrs may still be caught farther aloft. By mid-century, the big American California clippers were carrying standing skysails as a matter of course, as did their successors, the burdensome Downeasters, which after the Civil W ar continued to carry cargo from East Coast ports, mainly New York, around Cape Horn to San Francisco, Portland and Seattle, a trade that petered out a little before World War I. As noted earlier, these ships with skysails drew the seaman&#39;s eye. And distinctions were made; a ship carrying a skysail ya rd only on the mainmast was known as a &quot;main skysa il ya rder,&quot; while the proud lofty ship with three was called a &quot;three skysail yarder.&quot; These somewhat cumbersome phrases may not come trippingly off your tongue, but they did off seamen&#39;s-these were common ways to ch aracterize a Downeaster. The first use of the name &quot;skysail &quot; cited by the Oxford English Dictionary, which does a marvelous job surveying the first appearance of words in the language and their evolving meanings in the common usage, notes the sea-experienced novelist Frederick Marryat having one of his characters say: &quot;I set and took in every sail, from a sky-sail to a try-sail.&quot; H e means he went through the changes from being in full bloom to being snugged down, the trysail being a customary heavy weather sa il , and the skysa il the rare topmost flower that blooms only in gentle breezes in fair weather. That remark was written in 1829. The O ED , faithful to its charge of tracing out the course of common speech, notes a handbook a generation earlier in 1794, making mention of &quot;sky-scrapers ,&quot; triangular sails set above the royals (the highest squaresa ils th en regularly carried) to get a scrap more canvas atop everything. The royal, the next sail down, was defined in 1769 by Falco ner as &quot;A name given to the highest sail, in any ship.&quot; And so it was in Falconer&#39;s day. But this had 20

been true for over a century, for back in Stuart times the great sip Sovereign of the Seas (launched 1637) carried royals on three masts, and it&#39;s clear from contemporary pictures that the royal yard was a standing yard, that is, carried in place aloft under normal conditions, not just sent up when occasion called for it. These same pictures confirm, by the way, that the upper sails were stored by being gathered into the capacious &quot;tops,&quot; big walled platforms on the masts. The days of men laying out on the upper ya rds to sow sail came later in the century, as ya rds grew longer and footrop es were added to them so the men had a secure footing-well, more or less secure-to stand on as they reached over the yard to gather in and furl the sail. In the later days of sail, skysails tended to be done away with as sailing ships carried cheaper cargoes, with ever smaller crews, and the royal res umed undisputed sway as the topmost sa il. The Wavertree lost her skysail early on, as an economy meas ure, and the great steel carriers of the 1900s were designed from the beginning with royals as the topmost sail. The next sa il below the royal is the topgallant (pronounced t&#39;gallant), a swashbuckling Renaissance name for a sail that began to come into use in early Tudor times and that m ay be glimpsed sometimes in the pictures of the ships that fought in the Armada campaign of 1588, particularly the loftier, more windward-going English ships . &quot;Gallant&quot; then meant so mething extra, something over the top, as it still does in some senses. The OED finds a narrative of 1599 of early voyages to the Levant reporting that a ship &quot;made away with all the sayle they had, drabblings and topgalands,&quot; the &quot;drabblings&quot; being lengths of canvas added to the lower edge of bonnets which in turn are laced to the foot of a sai l to increase its area, and &quot;topgalands&quot; being the loftiest sail that they, or probably anyone at that time, ca rried. Something over the top, indeed! Curiously enough, the Nava l Accounts of Henry VII, the first Tudor monarch, for 1497, a full century earlier, record &quot;a toppe maste above the mayne Toppe maste,&quot; and not just a m as t (it might have carried only a flag) , but also &#39;&#39;A sayle to the same,&quot; and eight shrouds, a considerable number, to hold against the pull of a considerable sail.

By 1514, in the inventory of the great ship of Henry VIII, the Henri Grace a Dieu , launched in June that year, we find a &quot;Toppe Galam apon the foretopmast,&quot; and the same thing for the m ain topmast-so by then the sa il that surprisingly appears in an inventory seventeen years earlier had got its present-day name. The sails are pictured in the contemporary Anthony Roll- little handkerchiefs that co uldn&#39;t have done much work but certainly added to the ship&#39;s toplofty appearance. The topgallants shown in the Armada pictures three quarters of a century later are bigger and plainly functional, with the huge lower sails shown earlier in the century reduced in size in what is becoming the fully artic ulated square rig our eye is accustomed to. By the Wavertree&#39;s time the topgallant sail (called by most sailors a &quot;t&#39;gallant,&quot; a &quot;t&#39;gansl&quot; or just &quot;ga ns&#39; l&quot;) had achieved great size. Alan Villiers, who had sailed in the similar British ship Be/Lands, didn&#39;t like the Wavertree&#39;s &quot; huge, man-murdering topgallants,&quot; fully forty feet tall. Other ships of the Wavertree&#39;s era h ad com e to split these big sails into upper and lower topgallants, the lower being equivalent to a full topgallant with three reefs tucked in, whi le the upper topgallant yard was lowered to sit just above the lower, where the m en could stow it far more easily than they could stow or reef the big full sail. In this, as in other details of her design and finish, the Wavertree was an anachronism when sh e was launched; she did not adopt the split topgallant with its extra expense and weight, despite its labor-saving capability. Neither, for that matter, did the big wooden Yankee Downeasters, but their topgallants tended to be shallower and more controllable, the extra area being more than made up in rather big royals and, quite often, standing skysails above that. In the last three cenmries of the sailing ship, the topsails were the main engine of the ship. Set below the topgallant and above the lowest sails (known as &quot;the courses&quot;), the topsails were also the last sails to be taken in in stormy weather, being oddly enough easier to control and less dangerous to work than the courses. This was because they were held at four corners, whereas the courses below them trimmed loosely through sheaves (called chesstrees) set in