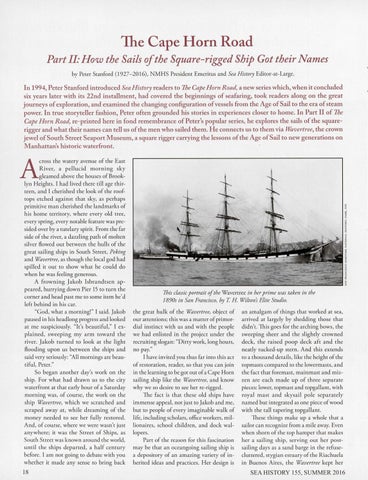 In 1994, Peter Stanford introduced Sea History readers to The Cape Horn Road, a new series which, when it concluded six years later with its 22nd installment, had covered the beginnings of seafaring, took readers along on the great journeys of exploration, and examined the changing configuration of vessels from the Age of Sail to the era of steam power. In true storyteller fashion, Peter often grounded his stories in experiences closer to home. In Part II of The Cape Horn Road, re-printed here in fond remembrance of Peter&#39;s popular series, he explores the sails of the squarerigger and what their names can tell us of the men who sailed them. He connects us to them via Wll:vertree, the crown jewel of South Street Seaport Museum, a square rigger carrying the lessons of the Age of Sail to new generations on Manhattan&#39;s historic waterfront.

cross the watery avenue of the East River, a pellucid morning sky gleamed above the houses of Brooklyn Heights. I had lived there till age thirteen, and I cherished the look of the rooftops etched against that sky, as perhaps primitive man cherished the landmarks of his home territory, where every old tree, every spring, every notable feature was presided over by a tutelary spirit. From the far side of rhe river, a dazzling path of molten silver flowed out between the hulls of the great sailing ships in South Street, Peking and Wavertree, as though the local god had spilled it out to show what he could do when he was feeling generous. A frowning Jakob Isbrandrsen appeared, hurrying down Pier 15 to turn the corner and head past me to some item he&#39;d left behind in his car. &quot;God, what a morning! &quot; I said. Jakob paused in his headlong progress and looked at me suspiciously. &quot;Ir&#39;s beautiful,&quot; I explained, sweeping my arm toward the river. Jakob turned to look at the light flooding upon us between the ships and said very seriously: &quot;All mornings are beautiful, Peter.&quot; So began another day&#39;s work on the ship. For what had drawn us to the city waterfront at that early hour of a Saturday morning was, of course, the work on the ship Wavertree, which we scratched and scraped away at, while dreaming of the money needed to see her fully restored. And, of course, where we were wasn&#39;t just anywhere; it was the Street of Ships, as South Street was known around the world, until the ships departed, a half century before. I am not going to debate with you whether it made any sense to bring back

Ihis classic portrait ofthe Wavertree in her prime was taken in the 1890s in San Francisco, by T H. Wilton&#39;s Elite Studio.

the great hulk of the Wavertree, object of our attentions; this was a matter of primordial instinct with us and with the people we had enlisted in the project under the recruiting slogan: &quot;Dirty work, long hours, no pay.&quot; I have invited you thus far into this act of restoration, reader, so that you can join in the learning to be got out of a Cape Horn sailing ship like the Wavertree, and know why we so desire to see her re-rigged. The fact is that these old ships have immense appeal, not just to Jakob and me, but to people of every imaginable walk of life, including scholars, office workers, millionaires, school children, and dock wallopers. Part of the reason for this fascination may be that an oceangoing sailing ship is a depository of an amazing variety of inherited ideas and practices. Her design is

an amalgam of things that worked at sea, arrived at largely by shedding those that didn&#39;t. This goes for the arching bows, the sweeping sheer and the slightly crowned deck, the raised poop deck aft and the neatly tucked-up stern. And this extends to a thousand details, like the height of the topmasts compared to the lowermasts, and the fact that foremast, mainmast and mizzen are each made up of three separate pieces: lower, topmast and topgallant, with royal mast and skysai l pole separately named but integrated as one piece of wood with the tall tapering topgallant. These things make up a whole that a sailor can recognize from a mile away. Even when shorn of the top hamper that makes her a sailing ship, serving out her postsailing days as a sand barge in the refusecluttered, stygian estuary of the Riachuela in Buenos Aires, the Wavertree kept her