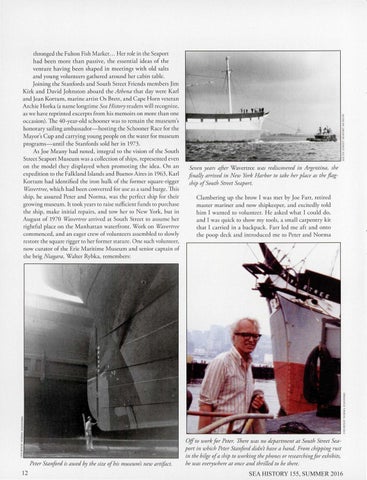 thronged the Fulron Fish Market. .. H er role in the Seaport h ad been m ore than passive, the essential ideas of the ve nture h aving been sh aped in meetings with old salts and yo ung volunteers gathered aro und her cabin table. Join ing the Stanfords and South Street Friends members Jim Kirk and David Johnsron aboard the Athena that day were Ka rl and Jea n Ko rtum, marine artist Os Brett, and Cape Horn veteran A rchie H orka (a name longtime Sea History readers will recogni ze, as we have reprinted excerpts from his memoirs on more than one occas ion). The 40-year-old schoone r was to remain the museum&#39;s honorary sailing ambassador- hos ting the Schooner Race for the Mayor&#39;s C up and carrying young people on the water for museum programs-until the Stanfords sold her in 1973. As Joe M eany had noted, integral to the vision of the South Stree t Seaport Museum was a collection of shi ps, represented even on the model they displayed when pro motin g the idea. O n an exped ition to the Falkland Islands and Buenos Aires in 1963, Ka rl Kortu m had identified the iron hul k of the forme r square-rigger Wavertree, which had been convened fo r use as a sand barge. 1hi s sh ip, he ass ured Peter and Norma, was the perfect ship for their growing museum. It took years to raise sufficient funds to purchase the shi p, make in itial repairs, and tow her to New York, but in August of 1970 Wavertree arrived at South Street to ass ume he r ri ghtful place on the Manhattan waterfrom . Work on Wavertree commenced , and an eager crew of vo)umeers assembled to slowly restore the square rigger to her for mer stature. One such volumeer, now curator of the Erie Maritime M useum and senior capta in of the brig Niagara, Walter Rybka, remembers:

Seven years after Wavertree was rediscovered in Argentina, she finally arrived in New York Harbor to take her place as the flagship ofSouth Street Seaport.

C lamberi ng up the brow I was met by Joe Farr, reti red master mariner and now ship keeper, and excitedly told h im I wa nted to volun teer. He as ked what I could do, and I was quick to show my tools, a small carpentry kit th at I carried in a backpack. Farr led me aft and onto the poop deck and introduced me to Peter and Norma

Off to work for Peter. 1here was no department at South Street Seaport in which Peter Stanford didn&#39;t have a hand. From chipping rust in the bilge ofa ship to working the phones or researching/or exhibits, he was everywhere at once and thrilled to be there.