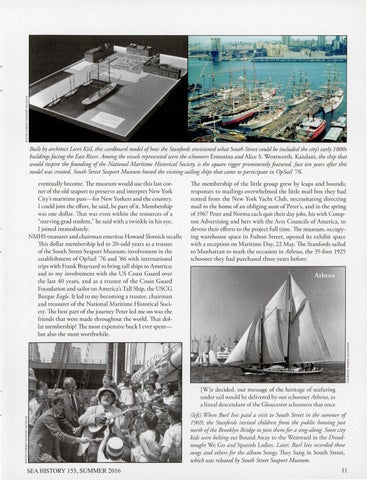 Built by architect Leevi Kiil, this cardboard model ofhow the Stanfords envisioned what South Street could be included the city&#39;s early 1800s buildings facing the East River. Among the vessels represented were the schooners Ernestina and Alice S. Wentworth. Kaiulani, the ship that would inspire the founding of the National Maritime Historical Society, is the square rigger prominently featured. j ust ten years after this model was created, South Street Seaport Museum hosted the visiting sailing ships that came to participate in OpSail &#39;76

eventually become. The museum would use this last corner of the old seaport to preserve and interpret New York C ity&#39;s maritime past-fo r New Yorkers and the country. I could join the effort, he said, be part of ir. Membership was one dollar. Thar was even within the resources of a &quot;starving grad student,&quot; he said with a twinkle in his eye. I joined immediately. NMHS treasurer and chairman emeritus Howard Slotnick recalls: This dollar membership led to 20-odd years as a trustee of the South Street Seaport Museum; involvement in the establishment of OpSail &#39;76 and &#39;86 with international trips with Frank Braynard to bring rail ships to America; and to my involvement with the US Coast Guard over rhe last 4 0 yea rs, and as a trustee of the Coast Guard Foundation and sa ilor on America&#39;s Tall Ship, rhe USCG Barque Eagle. Ir led ro my becoming a trustee, chairman and treasurer of rhe National Maritime Historical Society. The best part of the journey Peter led me on was the friends rhar were made throughout the world. Thar dollar membership? The mos t expensive buck I ever spentbur also rhe most worthwhile.

The membership of rhe lirrle group grew by leaps and bounds; responses to mailings overwhelmed rhe little mail box they had rented from the New York Yacht Club, necessitating directing mail to the home of an obliging aunt of Peter&#39;s, and in the spring of 1967 Peter and Norma each quit their day jobs, his with Compton Advertising and hers with the Arts Councils of America, to devote their efforts to the project full rime. The museum , occupying warehouse space in Fulton Street, opened its exhibit space with a reception on Maritime Day, 22 May. The Sranfords sailed to Manhattan to mark the occasion in Athena, rhe 35-foor 1925 schooner they had purchased three yea rs before:

[W]e decided, our message of the heri tage of seafarin g under sai l wo uld be delivered by our schooner Athena, as a lineal descendant of the Gloucester schooners that once (left) When Burl Ives paid a visit to South Street in the summer of 1969, the Stanfords invited children from the public housing just north ofthe Brooklyn Bridge to join them for a sing-along. Soon city kids were belting out Bound Away to the Westward in the Dreadnought We Go and Spanish Ladies. Later, Burl Ives recorded these songs and others for the album Songs They Sang in South Street, which was released by South Street Seaport Museum.